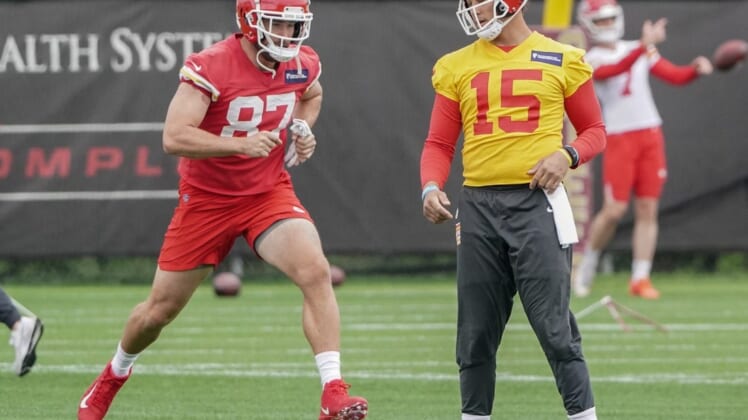 Kansas City Chiefs tight end Travis Kelce received a bump in pay for the 2022 season to compensate for the rising market value at his position, according to NFL Network.

Multiple reports indicate Kelce, who is signed through 2025, will be closer to the top tier of annual salaries for players at the position this season. The Chiefs, per NFL Network, opted to move money forward from the back end of the four-year, $57.25 million contract signed in 2020.

Kelce likely is to be the No. 1 receiver for Patrick Mahomes with Tyreek Hill shipped to the Miami Dolphins in the offseason.

Kittle, who is good friends with Kelce, said in May that the Chiefs aren’t paying their lead target enough money.

“So hear me out, Travis Kelce, six seasons in a row, 1,000 yards,” Kittle said. “I’m pretty sure he has the most receiving yards over any wide receiver, skill position in the last six years. He gets paid half of what a wide receiver makes, which just boggles my mind. I mean, to me, Travis Kelce, he’s been doing it for so long and at such a high level. And he doesn’t have an off game. I think he has one bad game a year, and it’s just because he’s getting triple-teamed. So like, he’s a player I look at like, when he gets the ball in his hands, he’s a monster.”

Kelce has the active record for tight ends with six consecutive 1,000-yard seasons and leads the NFL in receiving yards during that span by 80 yards.