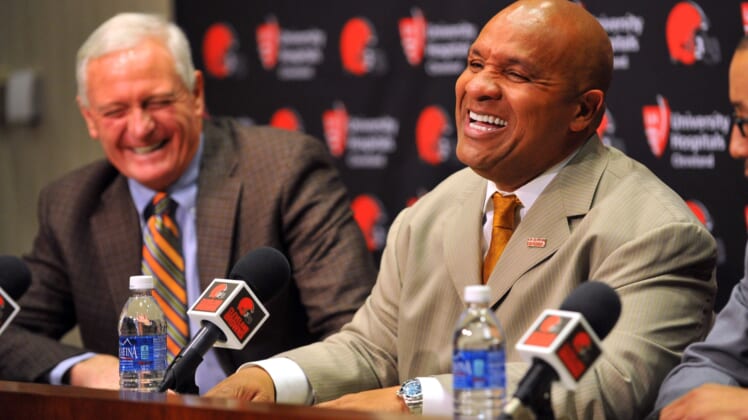 News broke Sunday morning that Marvin Lewis will step down from his position as head coach of the Cincinnati Bengals the past 15 years after the season concludes. It’s hardly surprising given the fact that Lewis has never won a single playoff game as head coach and because the Bengals have taken a turn for the worse the past couple of seasons.

Now here’s the kicker: According to a few different very plugged-in reporters, Cincinnati would jump head over heels to replace Lewis with Hue Jackson, currently the head coach of the Cleveland Browns. Of course, the complication here is that Browns owner Jimmy Haslam has continued to staunchly insist that Jackson will be back in Cleveland next year, no matter what the team’s record.

"Jimmy Haslam continues to say Hue Jackson will be back next season. That's not good news for the #Bengals. They were hoping to move on to Hue Jackson,"
Jay Glazer , FOX NFL

There was a wide-spread feeling around the NFL that Hue Jackson would be the Bengals’ top choice to succeed Marvin Lewis. Browns’ proclamation that they’ll keep Hue complicates that.

Wrote about the possibility Hue Jackson could return to Bengals for this BX in November. Respect for Jackson abound within organization and without doubt more willingness than anyone to overlook 1-28. Eyes are on Haslam holding to his word. https://t.co/ZQlkDyPieG https://t.co/iwRd4yFVXV

Really, this is just too much. Jackson has already cemented himself in the history books as one of the NFL’s most egregious losers. He’s cobbled together a record of 1-28 since Week 1 of the 2016 season. For his career, Jackson has a record of 9-36 as a head coach.

So, a franchise that has the second-longest tenured head coach in Lewis, who’s never won a playoff game, is clamoring for a guy whose record makes Jeff Fisher look like a genius. And based on the reports, Cincinnati’s not even going to fire Lewis — he’s leaving on his own accord.

If Jackson isn’t available, reports indicate the Bengals will look to one of their assistants to take over, rather than bringing in fresh blood.

It’s like a tragic comedy playing out in real life. And the only thing this scribe wonders at this point is how in the world Bengals fans are holding onto any sanity at all.