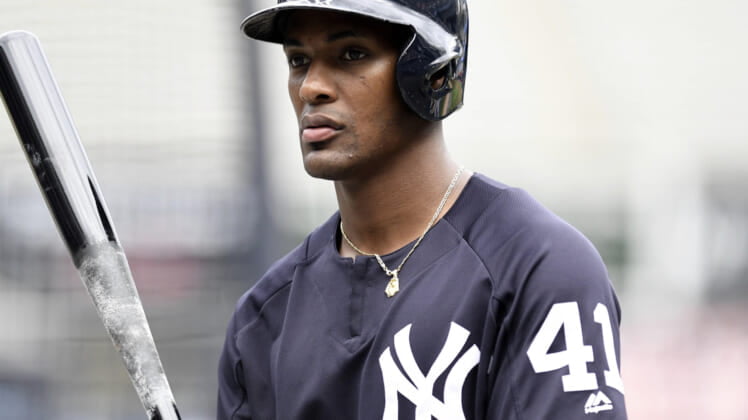 The two New York MLB teams could very well set Las Vegas on fire with what would be one of the biggest blockbuster trades in recent history.

With the Winter Meetings currently taking place in Sin City, reports have surfaced that the Mets and Yankees are in discussions with the Miami Marlins in a three-team trade that would send Noah Syndergaard to the Yankees and J.T. Realmuto to the Mets.

Mets & Yankees have talked about versions of a three-way deal involving Marlins that would send Realmuto to the Mets & Syndergaard to the Yankees, sources confirm.

A deal is not close, and frankly seems pretty unlikely.

But Brodie Van Wagenen is clearly willing to be creative.

If this were to come to fruition, a whole plethora of other pieces would have to be part of the trade. According to this report from Ken Rosenthal of The Athletic, that could include star Yankees third baseman Miguel Andujar heading to South Beach.

Name to watch with #Yankees: Miguel Andújar. Rival execs tell me and @ByRobertMurray NYY open to moving him. Would make sense as #Marlins’ ask for Realmuto; MIA wants established young MLB player as headliner. Also would line up with NYY pursuit of Machado. Torres could play SS.

It would be just one of several pieces headed to Miami. But Andujar would be a major get for Derek Jeter and Co.

The 23-year-old third baseman hit .297 with 27 homers and 92 RBI en route to finishing second in the AL Rookie of the Year voting last season. He would be a major building block for the Marlins.

Certainly, a lot of things have to still be worked out for this potential blockbuster to be finalized. But now that actual names are being mentioned, it could be further a long than most of us initially anticipated.