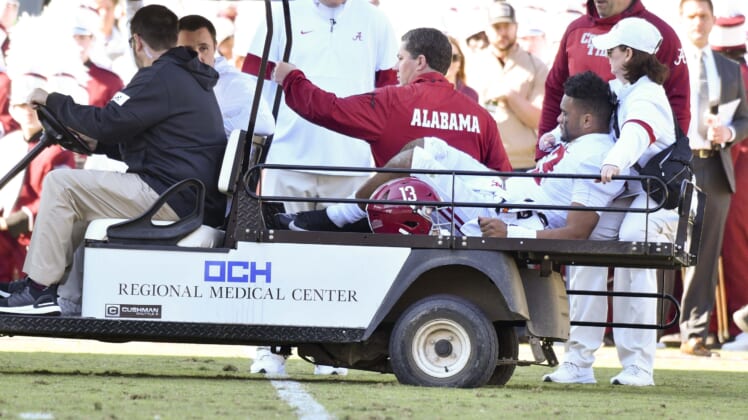 Tua Tagovailoa suffered a hip injury on Saturday against Mississippi State, was carted off the field, then taken by helicopter to a local hospital. Now comes the worst possible news, as Senior Bowl executive director Jim Nagy reports Tagovailoa will undergo surgery for a hip fracture, which is similar to the one that ended the great Bo Jackson’s career.

Prior to his injury on Saturday, Tagovailoa was having another fantastic outing. He had passed for 256 yards with two touchdowns on 14-of-18 attempts.

The Heisman candidate recently suffered a high-ankle sprain that required a surgical procedure. However, this new injury was unrelated to that injury and was one head coach Nick Saban described as a “freak injury.”

Tagovailoa has been mentioned as a potential No. 1 overall pick of the 2020 NFL Draft. Now, we can only hope he can fully recover from this devastating injury and play the game he loves once again.

Our hearts go out to Tagovailoa and his family as they navigate through this difficult circumstance.