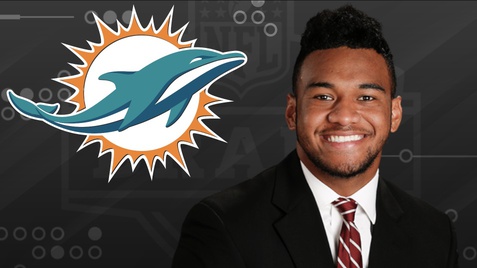 The Miami Dolphins spent nearly a year putting themselves in a position to draft Tua Tagovailoa. Now that they have their potential franchise quarterback, though, the team doesn’t plan to put him out on the field early in his NFL career.

According to The Miami Herald‘s Barry Jackson, the Dolphins’ front office plans to let Ryan Fitzpatrick serve as the team’s starting quarterback to begin the 2020 season and the gig could belong to him for quite some time.

Miami loves Tagovailoa and felt confident enough in his medical evaluation to draft him with the No. 5 overall pick. However, the organization believes that he isn’t quite ready to start immediately and the team would be better off in Fitzpatrick’s hands to begin the year.

While top picks typically get a great opportunity to become the Week 1 starter, Tagovailoa will be at a significant disadvantage. The COVID-19 pandemic has wiped out rookie camps and there is still a risk that minicamps in June could be delayed. While the rookie can use the time to talk with coaches in virtual meetings and can learn the playbook, he is unable to do on-field work with his new teammates.

It immediately gives Fitzpatrick a leg up on Tagovailoa in the competition to become Miami’s starting quarterback. The odds are even more in his favor because of his familiarity with offensive coordinator Chan Gailey. The duo worked together from 2010-’12, when Gailey was the Buffalo Bills head coach.

The 37-year-old quarterback also played very well this past season, despite an underwhelming supporting cast around him. Fitzpatrick completed 62% of his passes and threw for 3,529 yards with 20 passing touchdowns and an 85.5 quarterback rating.

Tagovailoa will likely get a shot to play eventually in his rookie season, especially given how beloved he already is in Miami. The 22-year-old will just have to wait for his shot to come and once it does, demonstrate why the Dolphins fell in love with him long before they drafted him.