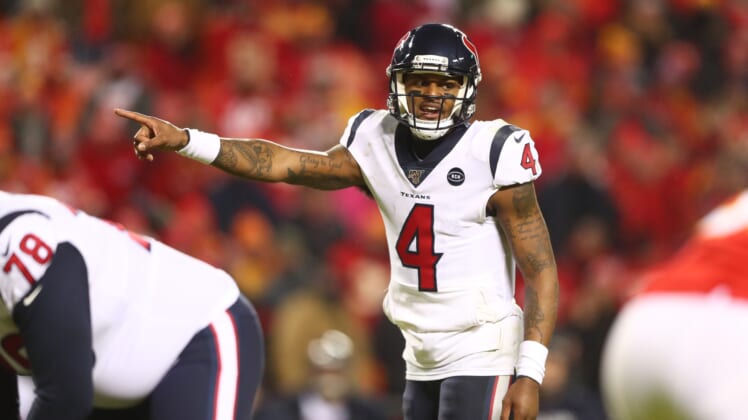 The Houston Texans struck gold in the 2017 NFL Draft by selecting Deshaun Watson. Now, the organization is pushing towards making him one of the NFL’s highest-paid players and a deal could be reached before the end of the year.

The Houston Texans know they need to make Deshaun Watson one of the highest-paid players in the league. Based on early negotiations with the star quarterback, he could even sign the richest deal in NFL history.

Both sides started discussing an extension before the organization exercised his fifth-year option. Now that Watson is under contract for the next two years, the Texans are working to keep him in Houston even longer.

In a mailbag for The Athletic, Texans’ reporter Aaron Reiss said he believes a contract extension will get done this year. It could be reached before the 2020 NFL season begins, but the team is also open to signing him to a multi-year deal during the regular season.

Watson isn’t expected to try and force his way out of Houston despite being upset about the DeAndre Hopkins trade. However, he could wait to sign a deal until after Dak Prescott and Patrick Mahomes sign their extensions.

Currently, there is only one major hurdle in contract negotiations between Prescott and the Dallas Cowboys. Whenever a deal is reached, he’s expected to land at least $35 million annually on his new deal. It would match Russell Wilson’s deal, which presently makes him the highest-paid quarterback in the NFL.

Mahomes and the Chiefs are working on a contract extension unlike any we’ve seen in NFL history. Whenever the deal is agreed to, he will become the first player to make at least $40 million per season.

It would be wise for Watson to wait for both quarterbacks to sign before he moves forward with his negotiations. As we learned with Laremy Tunsil’s record-breaking contract, Bill O’Brien has no issue giving out record-breaking deals.