Report: Talk of Trevor Siemian as Broncos’ starter is ‘legitimate’ 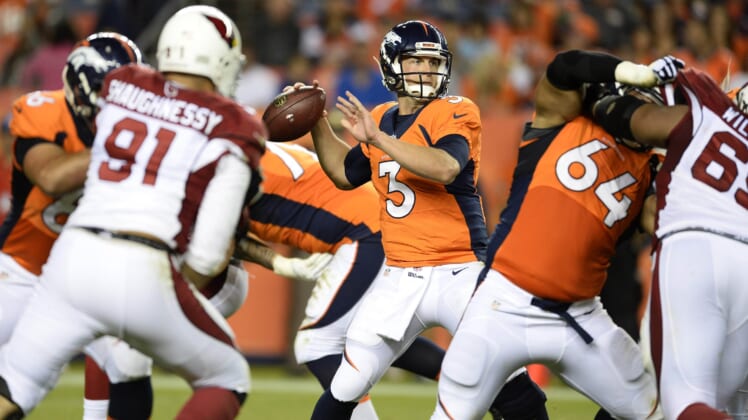 For the first time in a while, a defending Super Bowl champion enters the following season with a huge question mark at quarterback.

Following the retirement of all-time great signal caller Peyton Manning and the departure of Brock Osweiler in free agency, the Denver Broncos’ quarterback situation is about as unsettled as any in the NFL.

Though, recent suggestions from Denver indicate that holdover Trevor Siemian could be in line to start with a good performance during training camp (more on that here).

Now comes this from the venerable Adam Schefter over at ESPN. The NFL insider is reporting that talk of Siemian starting is “legitimate.”

“The Trevor Siemian talk and chatter is real. He has a legitimate chance to win the job. The competition is real,” Schefter reported on Sirius XM Radio on Monday.

On the surface, this seems to make no real sense. Of the three quarterbacks currently on Denver’s roster, Sanchez boasts the only NFL starting experience.

Meanwhile, the team traded up for Lynch during the first round of the draft this past spring.

Siemian, an un-drafted free-agent signing from Northwestern last year, has yet to attempt a regular season pass in the NFL. He also posted just 27 touchdowns compared to 24 interceptions in four college seasons.

This is a clear sign that Denver is not impressed by what it’s seen from Sanchez during off-season activities. And as it relates to Lynch, the expectation there has to be that he’s at least a year away from seeing the field in any real capacity.

Either way you spin it, the defending champs are in a less-than-enviable situation at the quarterback position with less than two weeks remaining until camp.