Report: Some optimism among players for 2020 MLB season 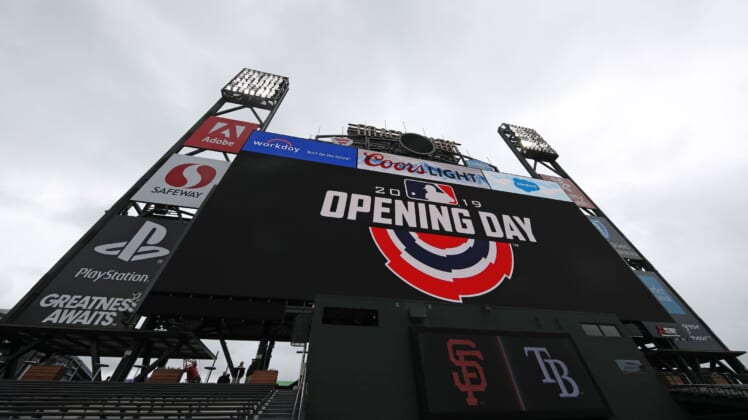 MLB commissioner Rob Manfred shocked the sports world on Monday by backpedaling on his promise for a 2020 MLB season. While hope is dwindling on baseball being played this year, there seems to be a little bit of reason for MLB fans to feel optimistic.

Some MLB players ‘optimistic’ deal can be made for 2020 season

A day after Rob Manfred told ESPN he isn’t confident there will be baseball this year, it seems hope isn’t completely gone on the players’ side. While negotiations between the MLB and MLBPA haven’t gone well, with Monday’s episode representing another setback, there is still some optimism in baseball.

According to SportsNet New York’s Andy Martino, Manfred is still interested in making a deal with the players for the 2020 season. While discussions have stalled, with the MLBPA cutting off negotiations and asking Manfred when they can show up and play, some players still think both sides will come back to the table.

The players’ union has held firm on their desire for fully prorated salaries this season. It was agreed to in March by MLB owners and the MLBPA, with a deal outlining the structure for a resumption of play. However, since that time, owners have suggested they can’t afford the prorated salaries with fans not allowed to attend games this season.

As a result, MLB’s proposals have asked players to take on a substantial pay cut for the second time. In the league’s final offer, submitted on Friday, players would receive 70% of their prorated salary during a 72-game regular season. In that scenario. In that instance, 2020 salaries would be cut by 66% based off the reduction from 162 games to 72, followed by a 30% reduction off the prorated pay.

What will it take for MLB and the MLB Players Association to reach a deal?

Both sides have largely made the same types of offers to each other during the negotiations. Owners have insisted on players taking a far greater pay cut, while also requiring them to sign a liability waiver to play during the COVID-19 pandemic. Meanwhile, the MLBPA’s proposals insisted on players receiving their full prorated salary.

As part of the agreement in March, Manfred has the ability to implement a shortened season with the approval of owners. However, the league fears the players’ union would file a grievance against MLB for negotiating in bad faith, which owners suspect they might lose. Losing the lawsuit would potentially cost MLB owners $1 billion, per The Athletic, which has been the driving force behind their desire to complete a deal.

If MLB is willing to offer players fully prorated salaries, with the MLBPA expanding the playoffs to increase revenue in exchange, both sides would likely have a deal. It will just come down to whether or not MLB owners are willing to take a financial hit this year for the sake of baseball being played.