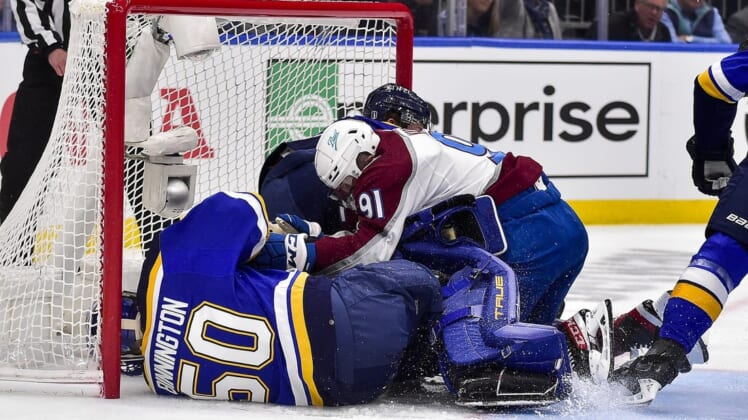 The NHL asked police in St. Louis to ramp up security at the Avalanche’s team hotel and the Blues’ arena amid threats allegedly made toward Colorado forward Nazem Kadri, TSN reported Monday.

Kadri was involved in a play in Game 3 of the teams’ second-round Western Conference playoff series that left Blues goaltender Jordan Binnington with a lower-body injury and out for the rest of the series.

Binnington was injured 6:45 into Saturday’s game after Kadri and Blues defenseman Calle Rosen crashed into him. Binnington tried some agility drills but was not able to continue.

No penalty was assessed but fans have called out Kadri for a dirty play. The Avalanche won 5-2 to take a 2-1 lead in the best-of-seven series, which resumes in St. Louis on Monday night.

Kadri is Muslim and a founding member of the Hockey Diversity Alliance. Akim Aliu, a former NHL player who chairs the committee, said Kadri has been on the receiving end of “racist” remarks since Saturday night.

“Naz has been subject to so many racist attacks and threats since last night that police had to be brought in,” Aliu wrote on Twitter on Sunday. “Racist attacks like this have no place in hockey and should be investigated and reported on.”

Kadri told reporters after the game that he did nothing wrong.

“I just see a loose puck,” he said. “I was kind of just sitting behind him and just tried to poke it with my stick. And I think their defenseman (Rosen) kind of collided with me and pushed me into him. So, you know, had that not been the case, I don’t think I would have hit him at all. It’s a loose puck. I’m just trying to bang it in.”

But Kadri, 33, has a history of suspensions and especially bad blood with the Blues and their fans. A year ago — May 21, 2021 — Kadri was suspended eight games following an illegal check to the head of Blues defenseman Justin Faulk in Game 2 of the Stanley Cup first-round playoff series. The Avalanche swept the series.

Including last year, Kadri has been suspended three times in the postseason.