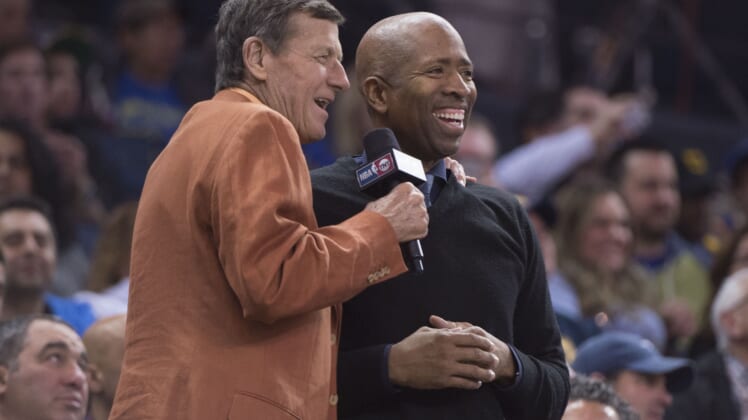 The Houston Rockets are interviewing people for their head coaching vacancy, and at least one of the interviewees is an outside of the box candidate. ESPN’s Calvin Watkins is reporting that the team will interview former Rocket and current TNT analyst, Kenny Smith.

Rockets will interview Kenny Smith tomorrow according to a source.

The prime candidate should be Frank Vogel, who they’re also reportedly interested in. Houston was an abysmal defensive team in 2015-16, ranking in a tie for 18th in opponent’s field goal percentage and 25th in points allowed per game. If that team is ever going to be championship caliber, they need someone who will get the players to take defense seriously, which Vogel has a good history of doing.

With that said, there’s nothing wrong with interviewing a wide variety of candidates. Smith has been involved with the NBA since getting drafted in 1987, but would be a completely unexpected hire. He has been an analyst with TNT since retiring in 1998. While hiring an analyst is not uncommon, it is relatively uncommon to hire someone with no front office or coaching experience.

Smith was a part of Houston’s NBA Championship winning teams in 1994 and 1995, so he’d certainly remind fans of their glory days. Still, it’s hard to imagine he’ll be hired for the job.

Quite frankly, unless the Rockets offer Smith an obscene amount of money, it would be hard to understand why he’d take this job. Being an analyst with TNT certainly pays well, requires a fraction of the hours, virtually no travel and none of the additional headache that would come with being an NBA coach.

Still, the fact that he’s agreeing to an interview tells us he’s at least remotely interested in the transition.

While Smith and the Rockets is an interesting combo, it’s an idea that shouldn’t go beyond the early interview stage. Both parties are better off apart.