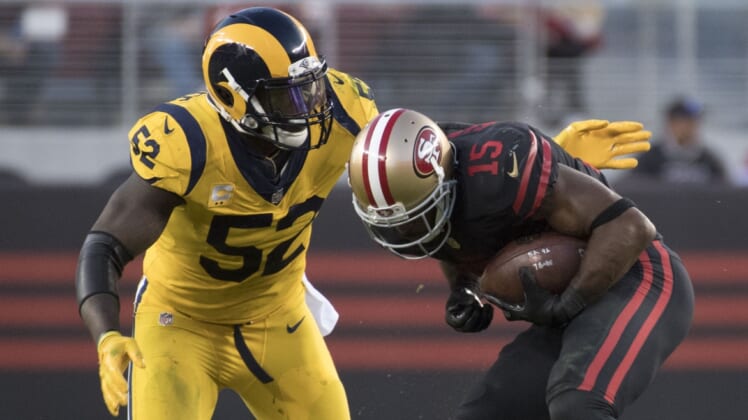 The Los Angeles Rams continue to be extremely active on the trade front leading up to the start of free agency next week. On the heels of acquiring Marcus Peters and dealing Robert Quinn in separate trades earlier in the offseason, the defending NFC West champions have reportedly sent starting linebacker Alec Ogletree to the New York Giants in exchange for two 2018 NFL Draft picks.

And another trade: Rams trading LB Alec Ogletree to the New York Giants for two 2018 draft picks, per league source.

Ogletree, 26, has started 31 of a possible 32 games over the past two seasons. Last year alone, the former first-round pick recorded 95 tackles and 10 passes defended in what was the best performance of his five-year NFL career. The linebacker had just signed a four-year, $42.8 million extension with Los Angeles last July.

In addition to picking up the veteran linebacker, New York acquired a 2019 seventh-round pick from Los Angeles. In return, the Rams pick up a fourth and sixth-round pick in April’s draft.

Compensation update: Giants are trading their fourth-round pick and their sixth-round pick in return for LB Alec Ogletree and the Rams' 2019 seventh-round pick, per source.

This is a darn good move for a Giants team that has struggled at linebacker in recent years. It’s also a representation of Rams general manager Les Snead admitting a mistake in extending Ogletree last summer.