Report: Rams’ Jalen Ramsey could get $20-plus million annually on extension 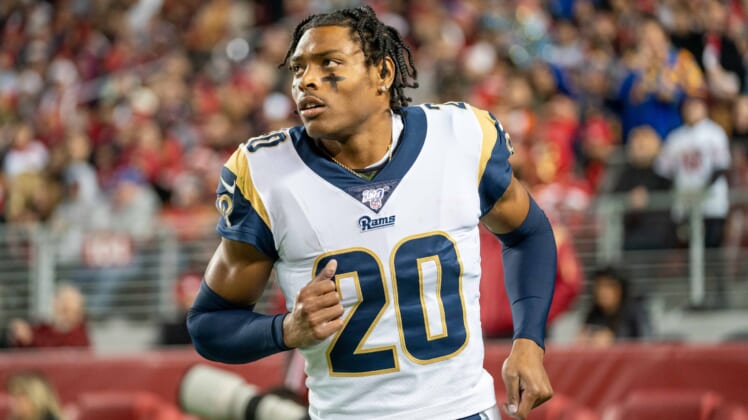 Despite the economic uncertainty surrounding the NFL, we have seen multiple players reset the market at their positions in recent months.

There’s now another big-name player who could be in line for a record-breaking contract.

“L.A. surrendered two first-round picks for Ramsey, giving him leverage similar to what Laremy Tunsil had over the Texans after Houston’s big trade for the franchise left tackle. Tunsil parlayed that into a deal at $22 million per, which represented a 22% jump over what had been the top of the tackle market. Such a markup on the corner market would make Ramsey the league’s first $20 million man at the position. It’s a fair bet he gets there,” MMQB’s Albert Breer noted on Thuesday.

Despite what promises to be major salary cap issues moving forward and after having to get rid of core players due to salaries, the Rams are going to want to extend Ramsey here soon.

A first-round pick of the Jacksonville Jaguars back in 2016, Ramsey is entering the final year of his rookie contract. He’s set to count $13.7 million against the cap in 2020. It goes without saying that Los Angeles wants to get a deal done in order to avoid having to either to place the franchise tag on Ramsey or let him hit free agency next March.

Jalen Ramsey struggled with the Rams

Acquired from Jacksonville about midway through the 2020 season, the boisterous Ramsey recorded 33 tackles, four passes defended and one interception in nine games with the Rams.

Those are the basic numbers. But advanced stats tell us a story of a previous shut-down corner who struggled in Southern California. Pro Football Focus gave Ramsey a 71.5 grade for the 2019 season, noting that he was in the middle of the pack among NFL starters in catches allowed.

Former Dallas Cowboys Pro Bowler Byron Jones reset the corner market when he inked a five-year, $82.5 million deal with the Miami Dolphins back in March. Said contract called for $46 million guaranteed at signing and $54.38 million in total guarantees.

Taking into account market inflation and the fact that record-breaking deals are currently the name of the game, $100 million over five seasons with $60 million guaranteed at signing makes sense for Ramsey. Whether that would be a foolish deal for the Rams remains to be seen.