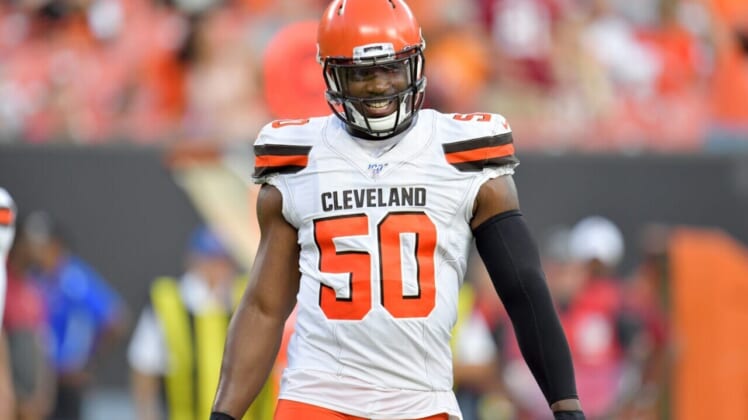 CLEVELAND, OHIO – AUGUST 08: Defensive end Chris Smith #50 of the Cleveland Browns during the first half of a preseason game against the Washington Redskins at FirstEnergy Stadium on August 08, 2019 in Cleveland, Ohio. (Photo by Jason Miller/Getty Images)

According to his agent, the former Browns defensive end Chris Smith is signing a one-year contract with the Las Vegas Raiders.

While many opined for the likes of Jadeveon Clowney or Yannick Ngakoue, reports this morning indicated the Raiders are signing defensive end Chris Smith to a one-year deal. No official announcement from the Raiders has been made.

Smith was waived by the Browns this past December and then was signed by the Carolina Panthers in March, only to be released July 31st.

Chris Smith has 67 tackles, and 4.5 sacks over the course of his career.

In 2018, Smith started two games for Cleveland recording two sacks and 21 combined tackles. In 2019 for the Browns, Smith played in nine games and recorded just one tackle.

The Raiders are looking to add depth to their young defense.

No word yet on a corresponding roster move by Las Vegas to get to the 80-man limit set by the NFL.