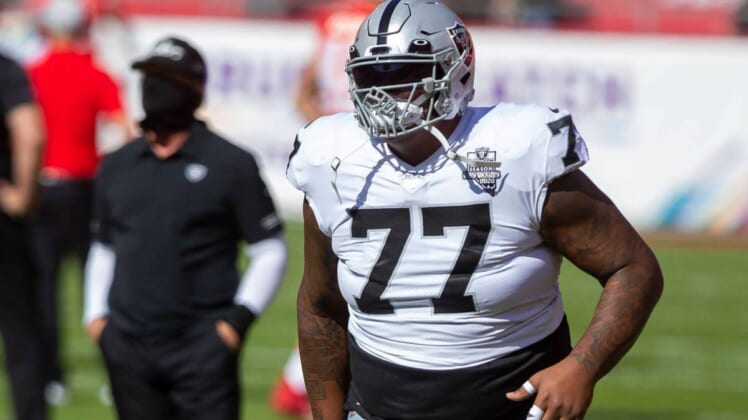 The Las Vegas Raiders, coming off their bye week and preparing to face the Tampa Bay Buccaneers on Sunday Night Football, reportedly will move Trent Brown to the COVID reserve list.

HENDERSON, Nev – If reports are true, the Raiders will, again, be without their starting right tackle as various media indicate the team will place right tackle Trent Brown on the COVID reserve list. Brown was not at practice this morning and the team deferred to head coach Jon Gruden’s 12:15 pm press conference for official confirmation.

Tom Pelissero of the NFL Network first reported the news right before the team was hitting the practice field on Wednesday morning in Henderson. Brown had played just three snaps prior to his return in the team’s huge victory over the Kansas City Chiefs two weeks ago.

What is not known is if Brown himself tested positive or if he had been exposed to someone who was. With the NFL’s contact tracing protocols in place, players whereabout are tracked inside the team’s facilities. If Brown came into contact with someone who was positive for the coronavirus, that would also require him to go into the COVID protocol.

Trent Brown fought back from a calf injury that frustrated the Raiders organization as he missed three games after playing just three snaps in the Raiders opening win against Carolina. Although no one from the organization publicly criticized Brown during his recovery, reports circulated they were frustrated with the lack of progress in Brown returning from the injury.

Brown returned against the Chiefs, playing every snap and having a good overall day despite being sidelined for several weeks.

We’ll update you when we find out more from Gruden this afternoon. What is known is Brown will almost certainly miss Sunday’s tough game against the Tom Brady-led Tampa Bay Buccaneers. The Tampa Bay defense was already shaping up to be a difficult challenge for the Raiders offensive line at full strength. Now, they’ll be without their top tackle once again.