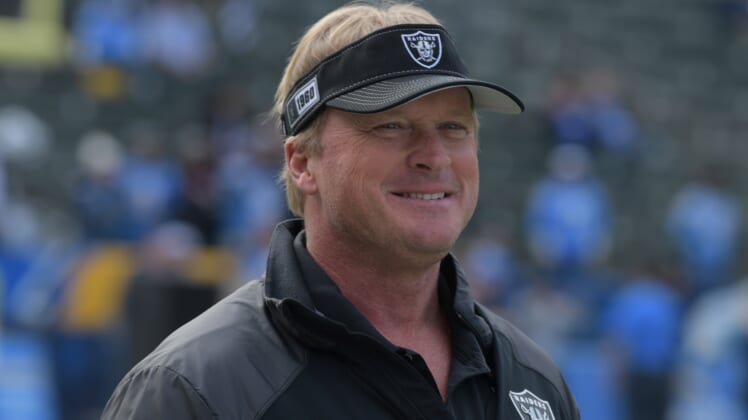 Jon Gruden wants to make a big splash this offseason with the Raiders moving to Las Vegas. If the Raiders pursuit of Tom Brady falls short, Gruden could reportedly target another top free-agent quarterback to replace Derek Carr.

According to The Athletic’s Vic Tafur, Gruden was very impressed with Tennessee Titans quarterback Ryan Tannehill this past season and could pursue him if he doesn’t stay with the Titans.

Tennessee’s involvement in the pursuit of Brady could lead to Tannehill hitting the open market. The Titans are reportedly willing to let Tannehill explore his options and the front office believes it has a good chance to sign Brady.

Tannehill is coming off an excellent season that saw him earn the NFL’s Comeback Player of the Year honor after posting a 177.5 quarterback rating with a 22-6 TD-INT ration.

If he becomes available and the Raiders pursue him, it would likely lead to Derek Carr being traded this offseason. While Gruden has supported his current starting quarterback publicly, the Raiders shopped Carr heavily at the NFL Combine.

Las Vegas is also reportedly interested in Marcus Mariota, who it could sign as potential competition for Carr in training camp.