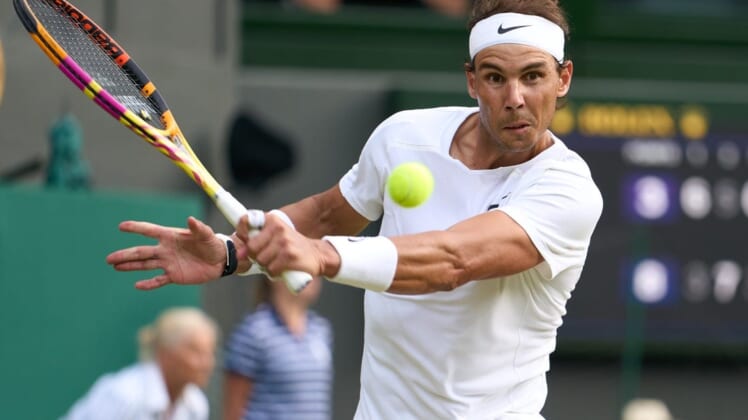 Nadal is still planning to play in Friday’s Wimbledon semifinal against Nick Kyrgios, per the Marca report.

The tear was revealed in tests that Nadal underwent Thursday morning, per the report.

Nadal missed a practice session Thursday, scheduled for 12:30 p.m. local time on Court 10. He opted instead to practice on the more secluded Aorangi courts with his family and coach, according to reports.

“I am used to holding pain and playing with problems,” Nadal told reporters after the quarterfinals. “Knowing that, when I feel something like I felt, something is not going the proper way in my abdomen. I had these feelings for a couple of days. Without a doubt, today was the worst day. There has been an important increase of pain and limitation.”

Nadal has dealt with this injury before. He had a 2 centimeter abdominal tear ahead of his 2009 U.S. Open semifinal against Juan Martin del Potro. He played the match but lost.

Nadal, 36, has won a record 22 Grand Slam men’s singles titles, including the first two this season at the Australian Open and French Open. He won his second and most recent Wimbledon title in 2010.