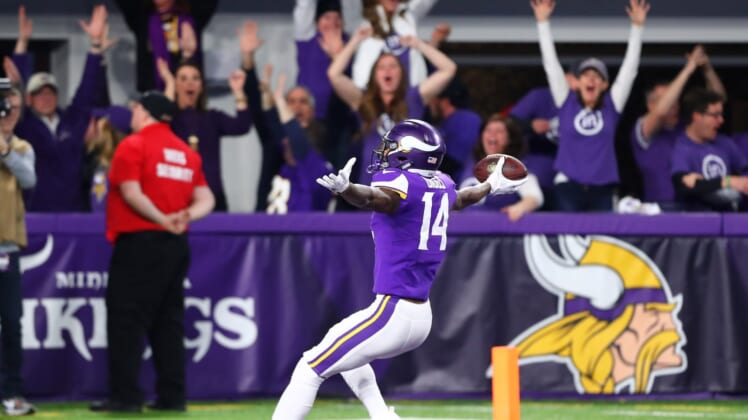 Many Minnesota Vikings fans were seeing their heartbeats increase during the latter stages of the team’s NFC Divisonal Playoff game against the New Orleans Saints on Sunday.

When Case Keenum hit receiver Stefon Diggs for the walk-off 61-yard touchdown as time expired, we’re pretty sure that fans in Minnesota had absolutely no idea what to do with themselves.

As it relates to Diggs, the star pass catcher just recently relayed a story his mother told him about that specific play. Whether in jest or not, Diggs’ mother told her son that she almost had a heart attack. For Diggs, this was the most-important conversation he had with anyone about that game-winning play.

Stefon Diggs says his mom told him she almost had a heart attack on his game-winning play. Says that was the most important conversation he had about it.

Sports themselves gives you the highs and the lows. This one scribe remembers almost needing a paper bag to breathe into during the New York Giants-San Francisco 49ers wildcard game many moons ago.

For Diggs’ mom, this was taken to a whole new level. There, her son was on the game’s grandest stage and making one of the biggest plays in Vikings franchise history. Any parent out there has to understand full well what she was going through.