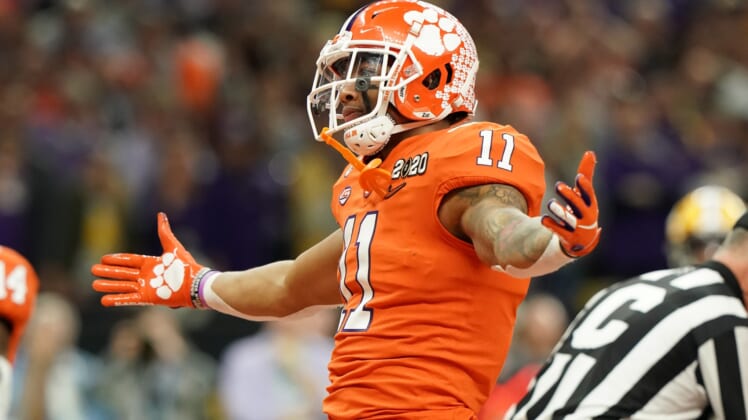 The 2020 NFL Draft is less than a month away and with it moving forward as scheduled, reports are already circulating around who will be the top picks. While many view the New York Giants’ selection at No. 4 overall to be a mystery in the draft, many NFL scouts reportedly expect the team to bring a certain defensive star to New York.

According to Bleacher Report’s Matt Miller, many scouts around the league believe the Giants will select Clemson Tigers linebacker Isaiah Simmons with the No. 4 overall selection. Scouts believe New York’s decision to keep Nate Solder and signing Cameron Fleming indicate the Giants will pass on an offensive tackle with the pick and grab one of the draft’s most athletic players.

Simmons arrived at the NFL Combine coming off a stellar 2019 season and an even more incredible performance in the College Football Playoffs. The 21-year-old was named the Butkus Award winner, given to the country’s top linebacker, and was named a unanimous first-team All-American selection.

Capable of playing either safety or linebacker, Simmons stunned during the College Football Playoff. He recorded an interception in the win over Ohio State then recorded two pass deflections, two tackles for loss and a sack in the title game.

He proved himself to be an outstanding athlete during the season, but NFL fans were still shocked when he lit up the NFL Scouting Combine. After posting a 39-inch vertical and running a 4.39 in the 40-yard dash, the 6-foot-4 linebacker solidified his stock as a top pick.

Given the Washington Redskins’ strong interest in Ohio State edge rusher Chase Young and the Detroit Lions need for a cornerback, Simmons should be available for the Giants at the No. 4 pick. If general manager Dave Gettleman turns in his draft card with Simmons’ name on it, that would be an outstanding pick for the Giants.