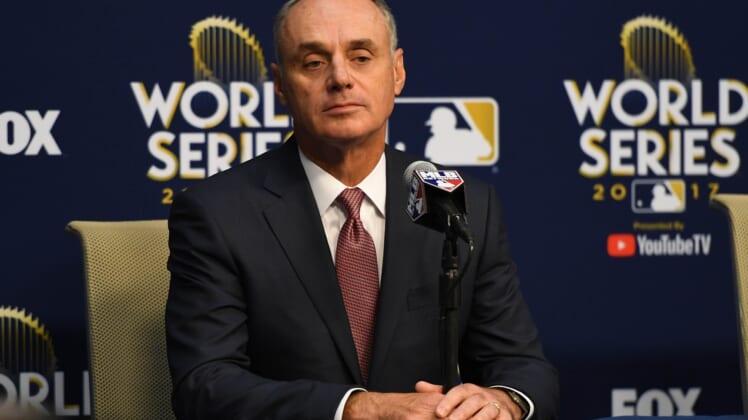 Just days after the MLB Players Association rejected the latest offer from MLB for a 2020 season, team owners will hold a conference call today to determine how the league will move forward with the upcoming season.

MLB not expected to make a new proposal for 2020 season

On Friday, MLB submitted an offer for a 72-game season that would provide players with 70% of their prorated salaries for the upcoming season. The offer was quickly rejected, with the MLBPA sending a letter to the league asking them to end the unproductive negotiations and announce when the 2020 season will start.

Owners will hold a conference call on Monday to determine whether or not they submit a follow-up proposal. However, per MLB insider Jon Heyman, there is very little desire to submit another offer. As a result, MLB would recommend commissioner Rob Manfred move forward with his authority.

In an agreement made in March, the MLBPA gave Manfred the authority to implement a shorter season. Following months of negotiations, with players pushing for a 114-game season followed by an 89-game schedule, Manfred is expected to announce his plan. The 2020 season will likely be between 50-60 games, with players given a date to report for training. As part of the deal in March, players will receive their full prorated salaries.

MLB owners have cited significant financial hardship as the reason for being unable to afford giving players a fully prorated salary for a season of 70-plus games. This, despite the fact that MLB just agreed to a new billion-dollar television deal with Turner Sports for the rights to playoff games.

Coincidentally, MLB could have increased its revenue over the next two years if an agreement with the MLBPA for the 2020 season was reached. The players’ union offered to expand the postseason by two teams in each league for the 2021 and ’21 seasons, which MLB can’t do on its own.

It will likely be a matter of days before Manfred implements his plan for the 2020 MLB season. Once that happens, several players are prepared to sit out the year. Unfortunately for MLB, it could just be the first step in a labor dispute that will get far uglier with the MLBPA set to file a grievance after the season and the collective bargaining agreement expiring after 2021.