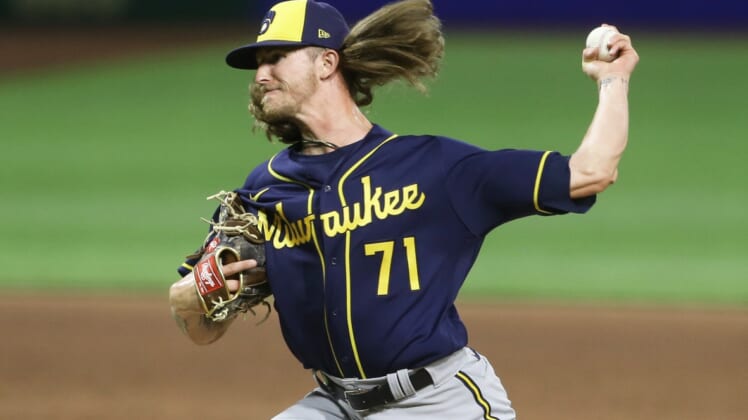 Milwaukee Brewers closer Josh Hader is one of the best relievers in baseball and with the MLB trade deadline quickly approaching, he might be one of the biggest names available on the market.

With so many teams in need of bullpen and the impact a dominant multi-inning reliever can make for a team, Hader could be the missing piece for a World Series contender.

LOOK: 5 surprise players who could be moved at MLB trade deadline

Milwaukee’s 26-year-old southpaw has been better than ever this season. The NL Reliever fo the Year award recipient the past two seasons and a two-time All-Star selection, Hader continues to shut opponents down with ease.

According to The Athletic’s Ken Rosenthal, the Brewers are actively listening to teams calling about Hader before the MLB trade deadline. After listening to offer during the winter meetings, Milwaukee is once again keeping an open mind.

MLB trade deadline: Five players who could be traded

Entering Wednesday’s action, Hader has struck out 13 batters in 9.1 innings and recorded more saves. Even more impressive, the young southpaw hasn’t allowed a single hit or run in that span.

It certainly makes sense to listen to any offers that may come along. The Brewers were expected to contend for the NL Central this season, but they’re approaching the midway point of the season with a 13-15 record and an ugly -23 run differential.

If Milwaukee doesn’t have a realistic shot at competing for the World Series, trading its top reliever is a logical move. We’ve routinely seen teams trade All-Star relievers for top prospects, who go on to become great hitters or starting pitchers. One great example is the New York Yankees acquiring Gleyber Torres in exchange for Aroldis Chapman in 2016.

Top contenders like the San Diego Padres, Chicago White Sox, Tampa Bay Rays and especially the Yankees could use another great weapon out of the bullpen. Adding Hader could be the difference between just making it to the ALCS or winning the World Series.

Of course, it will all come down to Milwaukee’s asking price. For now, it’s clearly too high for rival clubs with one executive saying the cost is a “bananas price.” Things can change as the deadline nears, making this a top storyline to follow before Aug. 31.