Report: Members of the Heat wanted to move on from Hassan Whiteside 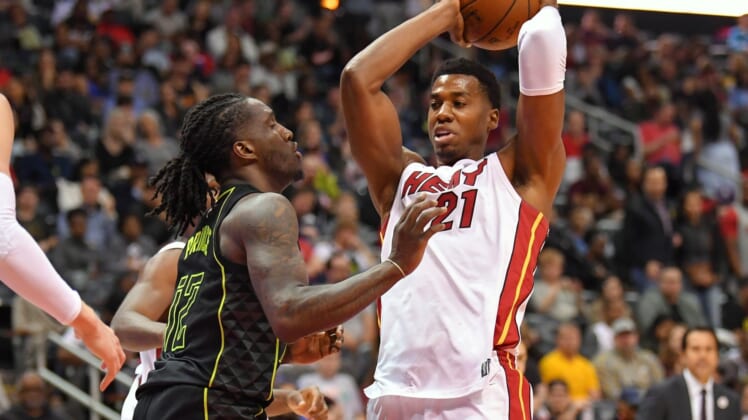 As the Miami Heat and star center Hassan Whiteside attempt to repair a contentious relationship, this piece of information coming out of South Beach can’t help matters.

According to Barry Jackson of the Miami Herald, multiple members of the Heat’s front office wanted the team to move on from Whiteside in a trade earlier this summer.

“After watching Hassan Whiteside perform unevenly and complain multiple times during an injury-marred season, multiple people on the Heat’s basketball side privately reached the same conclusion earlier this offseason,” Jackson reported. “The Heat should move on from Whiteside and try to find a team willing to trade for him.”

There was no real trade market for Whiteside’s services once free agency got going. Most of that has to do with the distractions behind the scenes in Miami, the center’s struggles last season and the $51.5 million he’s set to count against the cap over the next two seasons.

Despite push back from others within the organization, president Pat Riley has remained steadfast in believing that the relationship can be repaired. His stance falls in line with that of head coach Erik Spoelstra (more on that here).

Whiteside, 29, averaged 14.0 points and 11.4 rebounds for the Heat last season. Though, he fell out of favor during a five-game first-round playoff loss to Philadelphia that saw the center average just 5.2 points per game.

While Miami could still trade its best defender prior to the start of the season, it seems that the two sides are stuck with one another. Whether that means the relationship can be salvaged remains to be seen.