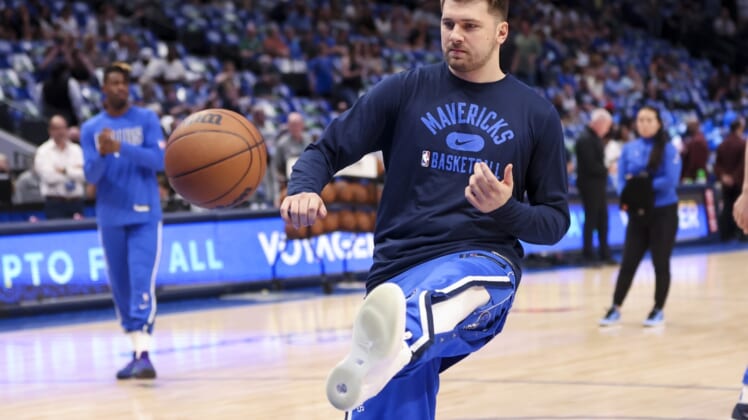 The Dallas Mavericks likely will be without star Luka Doncic in Game 2 of their Western Conference first-round series against the Utah Jazz on Monday, ESPN reported.

Doncic has a strained left calf. And while the Mavericks haven’t yet ruled him out, it’s trending that way, sources told ESPN.

Doncic took some shots on the court Sunday, but coach Jason Kidd couldn’t say whether his young superstar would play.

“Yesterday was another good day, and today he’s back on the court, so that’s a plus,” Kidd said. “And we’ll see how he feels tomorrow.”

The Mavericks are the No. 4 seed in the Western Conference but lost to the No. 5 Jazz 99-93 at home on Saturday in Game 1 without Doncic. Game 2 also is set for Dallas.

Doncic, 23, sustained the injury in the third quarter of the Mavericks’ 130-120 win against the San Antonio Spurs in the April 10 regular-season finale.

“Injuries come at the wrong time. Luka’s injury came at the wrong time, but we can’t cry over spilled milk, Kidd said. “We’re all professionals and we understand what the situation is. If he can go, that doesn’t automatically mean we’re going to win games, but we feel better if he is on the floor. Hopefully, he can get on the floor soon.”

A two-time All-NBA performer and three-time All-Star, Doncic averaged 28.4 points, 9.1 rebounds and 8.7 assists in 65 starts this season, finishing third in the league in scoring and fifth in assists.

Dallas is 8-10 without Doncic in the lineup.