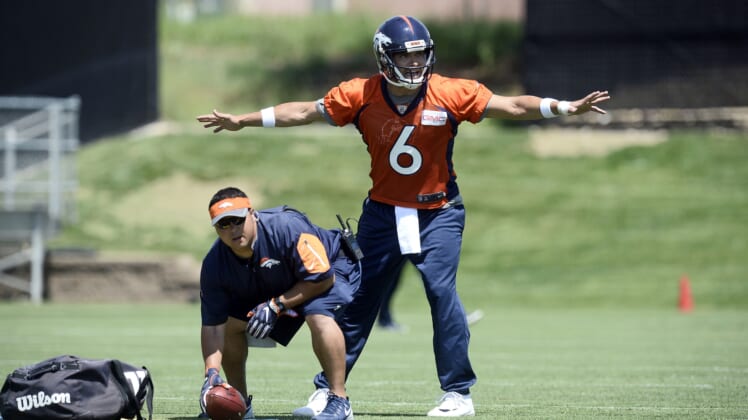 While most assume Mark Sanchez will be the starting quarterback for the Denver Broncos in 2016, he has surprisingly yet to prove he’s much better than Trevor Siemian.

Heading into training camp, Troy Renck of the Denver Post says Sanchez has only “a slight edge” over last year’s seventh-round pick.

I'd give slight edge to Sanchez. Before though I thought he had to lose the job. Now he has to win it in camp https://t.co/co3Pq77W0z

When the Broncos made the move to acquire Sanchez, it seemed obvious he’d be the bridge between the Peyton Manning era and the upcoming Paxton Lynch era. Mike Freeman of Bleacher Report recently noted a couple of unnamed Broncos teammates said “it’s no mystery” that Sanchez will start.

But head coach Gary Kubiak has made it clear since offseason workouts began that there is a real competition for the job and that Sanchez would have to earn it.

“I think Trevor and Mark have kind of looked each other in the eye the whole offseason,” Kubiak said in mid-June, via the team’s website. “When I sit there and watch them practice, I think they’re right there banging on each other, and I think the young kid [Lynch] is extremely talented and young and does a lot of great things, and has his troubles. So we’re trying to find the consistency somewhere. It’s a very competitive situation.”

The big edge Siemian has over Sanchez at this point is that he has spent an entire year in Kubiak’s system. And while it might seem crazy that a seventh-round pick out of Northwestern — a school hardly known for its quarterbacks — could start this year for Denver, it’s not like Sanchez is the bee’s knees.

In six years, Sanchez has compiled a mediocre 37-35 record completing 56.7 percent of his passes with 86 touchdowns and 84 interceptions. While his completion rates did go up during his tenure with the Philadelphia Eagles, he was still as turnover-prone as ever.

If Siemian has a good camp and Sanchez fails to wow, Kubiak likely won’t hesitate for one second to start the second-year pro.