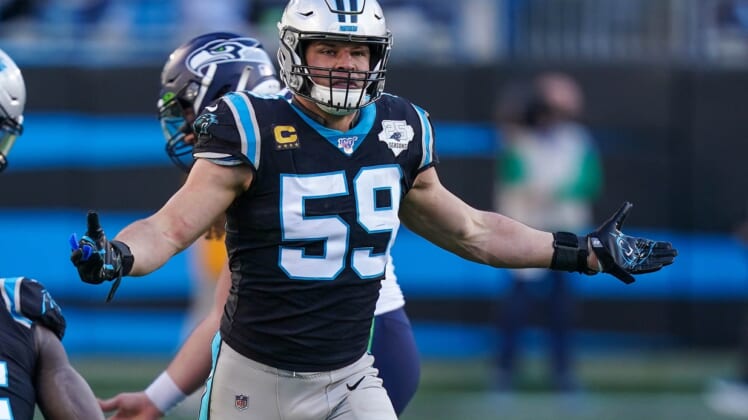 Luke Kuechly shocked the NFL world in January by retiring after only eight NFL seasons. Now, just a few months removed from his decision, the former Carolina Panthers star could be eyeing a return in a new role.

Kuechly, 28, never wanted to step away from football entirely. The former All-Pro linebacker and team captain just wanted to find a new way to impact the game and he might have just found it.

Coming out of Boston College in 2012, it was easy for scouts to identify Kuechly as a future NFL star. Now, the seven-time Pro Bowl star is reportedly looking to find future stars on his own.

According to Panthers.com’s Bill Both, Kuechly is considering joining the Panthers’ front office as a pro scout. It would give him the opportunity to do what he does most, watch film and learn as much as he can.

It’s no surprise that Carolina wants to keep its former leader in the building. He is known for being a respected voice in the locker room and as an icon in the community. Kuechly also recorded some incredible stats during his NFL career with 690 solo tackles, 75 tackles for loss, 66 pass deflections and 31 quarterback hits.

Kuechly has also been open to other roles, including joining the broadcast booth for a network or getting involved in coaching. For now, though, his love for analyzing tape might be the trait that helps him find his newest path in the NFL.

After seeing the success John Lynch and John Elway achieved transitioning from playing to becoming a general manager, it wouldn’t be a surprise if Kuechly followed the same trajector.

No matter what direction Kuechly decides to follow for his post-playing NFL career, we expect he will achieve great things.