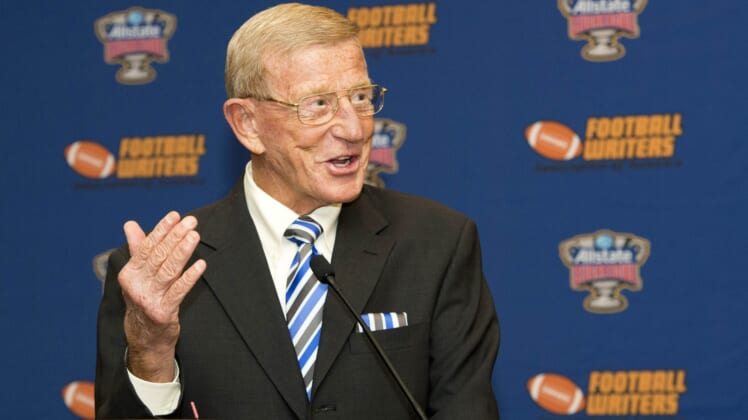 According to Richard Deitsch of Sports Illustrated, former Notre Dame football coach turned ESPN analyst Lou Holtz will no longer be with the network.

The now-78-year-old started working at ESPN in 2004 as a studio analyst, but as Deitsch noted, Holtz’s work alongside Mark May had become a tired “shtick.” It was time for a shake-up.

Granted, the news does not come as a complete surprise, considering 11 months ago Holtz told 247Sports’ Dan Murphy that 2014 would be his final season in the studio.

This is my fifth last year. They usually talk me into it. ESPN is a great organization to work for. We’ve been together nine years now. That’s unusual. They’re like my family. I love them. We enjoy it. There comes a time where you need to step aside and let the younger people do it.”

However, ESPN never confirmed the news, so Holtz’s future was unknown in the public realm until Deitsch’s report.

ESPN’s Saturday College Football Final coverage is undergoing serious changes during the offseason. The program had a terrific host in Rece Davis, but he’ll be moving to College GameDay as the replacement for Chris Fowler, who in 2014 took over for Brent Musberger as the play-by-play broadcaster on ABC’s primetime game.

Without a doubt, ESPN has a wealth of talent available to replace both Davis and Holtz, so the studio portion of the network’s college football coverage will be respectable once again.

Unfortunately, though, we won’t get any more of these gems from Holtz.

Thanks for the memories, Lou.