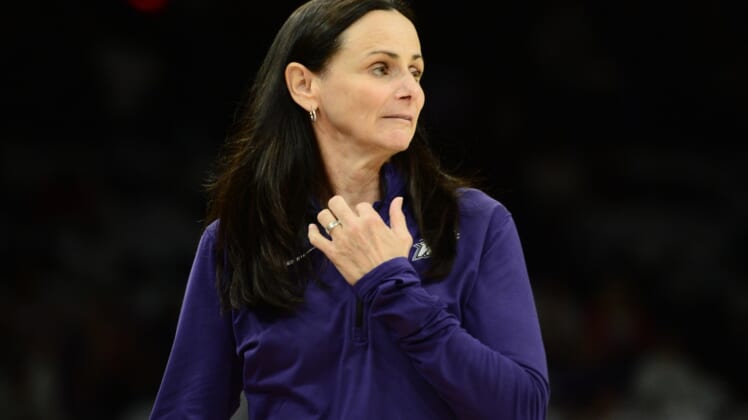 Oct 10, 2021; Phoenix, Arizona, USA; Phoenix Mercury head coach Sandy Brondello looks on against the Chicago Sky during the first half of game one of the 2021 WNBA Finals at Footprint Center. Mandatory Credit: Joe Camporeale-USA TODAY Sports

Brondello coached Phoenix for eight years, but the two sides agreed to mutually part ways in early December despite the Mercury reaching the WNBA Finals.

The Mercury lost to the Chicago Sky in four games.

Brondello, 53, coached the Mercury to a WNBA title in 2014, her first season with the team. She hails from Australia and also coaches the Australian national team.

As a player, Brondello was a WNBA All-Star in 1999 with the Detroit Shock.

The Liberty parted ways with former coach Walt Hopkins in early December after two seasons with the team.

New York had trouble getting the Sabrina Ionescu era off the ground under Hopkins, going a combined 14-40 in his two seasons. The Liberty’s roster also includes Betnijah Laney — the 2020 Most Improved Player and a 2021 All-Star — and three-time WNBA champion Natasha Howard.