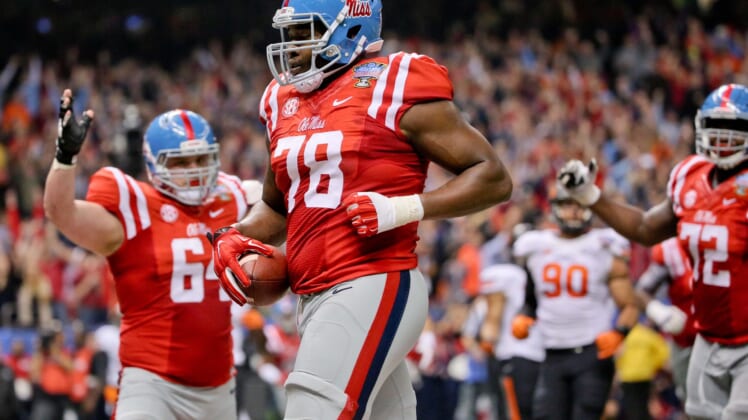 A troubling story is emerging,centered around one of the best prospects in this year’s NFL Draft, Laremy Tunsil. The Ole Miss tackle is being sued by his stepfather, Linsdsey Miller, over a dispute between the two in June.

According to Daniel Paulling of The Clarion-Ledger, the lawsuit claims that “Tunsil attacked Miller last June and that Tunsil defamed Miller’s character.”

“Defendant Tunsil pushed Mr. Miller against the wall in the hallway, causing him to fall…The disabled Navy combat veteran was simply unable to protect himself from the unprovoked assault by the six-foot-five-inch, 305-pound, powerfully-strong offensive tackle…After Defendant Tunsil had completely overpowered the now-helpless Mr. Miller, the All-American offensive lineman pounded the disabled American veteran severely, striking him with his fists multiple times.”

After the initial incident (via ESPN’s Brett McMurphy), Tunsil’s claim was that he was “defending his mother,” Desiree Tunsil, after Miller shoved her.

While there are two sides to every story, these allegations certainly don’t paint Tunsil in a good light.

Of course, the draft stock is secondary, as the societal issue of domestic violence is far more important. Still, with the NFL Draft only a little more than 24 hours away, the timing of this obviously couldn’t be much worse.

The knowledge of this lawsuit will be one of the most recent things that all of the teams will have on their minds when considering whether or not to draft Tunsil.

How much this hurts Tunsil’s draft stock depends on how well he convinced teams that, despite what could develop into a lingering issue, he won’t be a problem.