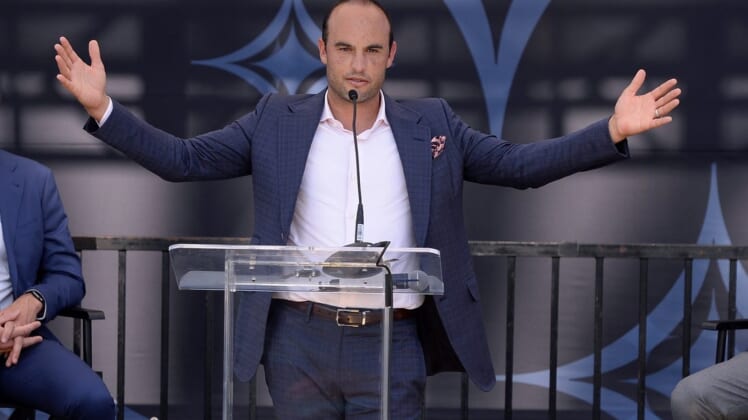 Landon Donovan, arguably the best player in Major League Soccer history, reportedly is a candidate to be the next head coach of his first MLS team.

The San Jose Earthquakes are considering Donovan and five other candidates for their vacant head-coaching position, ESPN reported Monday. The Quakes are currently under the guidance of interim head coach Alex Covelo after they fired Matias Almeyda three months ago.

Donovan is currently gaining managerial experience as head coach of the San Diego Loyal, the USL Championship team for which he is a co-owner and the executive vice president of soccer operations.

Donovan has been in charge on the field since the Loyal were formed in 2020. The team missed the playoffs in 2020, then was eliminated in the quarterfinals in 2021. The Loyal are currently in third place in the 13-team Western Conference.

The 40-year-old former forward, a Southern California native, began his pro career with Bayer Leverkusen in Germany, then went to the Earthquakes on loan from 2001-04. He spent 2005-14 and 2016 with the Los Angeles Galaxy. In all, he was an integral part of six MLS Cup championships, two with San Jose and four with LA.

Major League Soccer’s MVP award is named after Donovan, who holds the circuit’s all-time assists record with 136 and is second in goals with 145, trailing only Chris Wondolowski’s 171.

Donovan scored 57 goals for the U.S. men’s national team, tied for the all-time lead with Clint Dempsey. Donovan also logged 58 international assists, more than double the total of the player in second on the list, Michael Bradley (23).

According to ESPN, Covelo’s staff is receiving consideration to remain on the job with the Quakes. Per the report, more than 10 potential head coaches were interviewed, but the team has since narrowed the list.

The Earthquakes (4-7-7, 19 points) sit in last place in the Western Conference, though they have a win and a draw in their past two games. They are back in action Wednesday against the host Galaxy in Carson, Calif.