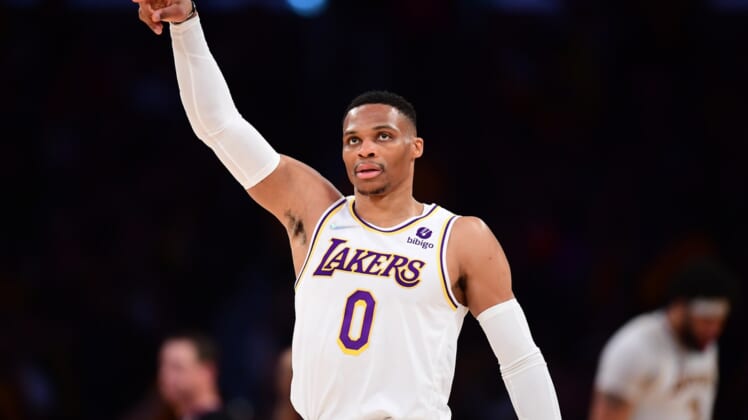 Russell Westbrook will not play Thursday night against the Golden State Warriors, ESPN reported, amid speculation that the Los Angeles Lakers are mulling waiving or trading the nine-time All-Star after one season.

Westbrook was added to the injury report Wednesday with right shoulder soreness and listed as questionable against the Warriors. He has played in 78 of 79 games this season.

Earlier Thursday, The Stein Line reported that the Lakers haven’t ruled out straight out waiving Westbrook and spreading out the $47 million over the next three years. Marc Stein reports the team is also considering trading Westbrook.

Westbrook last played Tuesday night against the Phoenix Suns and scored 28 points. After the game, Westbrook said the “plan” was to return to the Lakers next season.

“But nothing is promised. You kind of have to take it one day at a time each day. Like I’ve said all season long, you’ve got to play the cards you’re dealt,” Westbrook said.

Westbrook, 33, is averaging 18.5 points, 7.4 rebounds and 7.1 assists with 10 triple-doubles in 78 starts. However, the Lakers have been eliminated from playoff contention with a team that did not jell. Further, the future of head coach Frank Vogel is uncertain.

The Charlotte Hornets have emerged as a trade partner for Westbrook, per reports.