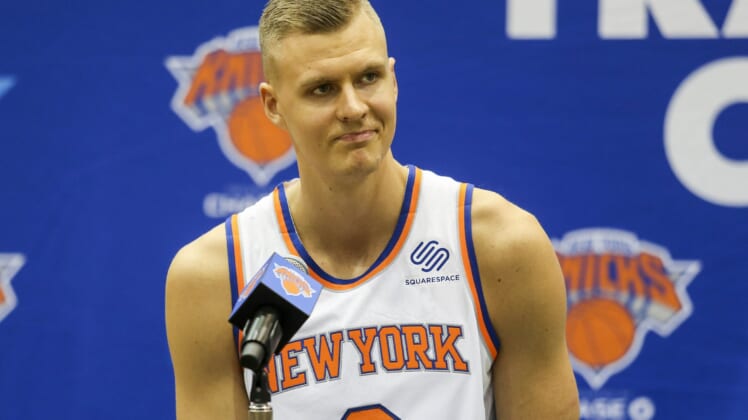 The New York Knicks have until Monday evening to come to terms with star forward Kristaps Porzingis on a rookie extension. That’s when the NBA offseason officially ends, making it a firm deadline for players under their rookie contracts to sign extensions.

According to ESPN’s Ian Begley, the Knicks and Porzingis are unlikely to agree to a new contract before said deadline. This means he’ll hit the restricted free agent market following the 2018-19 season.

The Knicks are not expected to come to an agreement with Kristaps Porzingis on a rookie extension prior to today’s deadline, so he will be a restricted free agent next summer: https://t.co/TIn1IEuLLT

There’s no real reason for Knicks fans to panic here. They will have enough cap room next summer to give Porzingis a max extension while also adding another max-contract player.

For New York, it’s all about preparing for free agency during what will be a huge offseason for both the team and the NBA.

By holding off on extending Porzingis now, New York can save about $10 million to spend on outside free agents when July of 2019 comes calling. Having been linked to Kyrie Irving and Kevin Durant, among others, that makes a ton of sense.

There is, however, an on-court element to this. Porzingis, 23, suffered a torn ACL back in February. It’s not yet known whether he’ll even suit up for the team this season. With that type of question mark relating to injury, it’s even smarter for the Knicks to hold off on signing Porzingis to what would be a franchise-altering extension.

At the very least, they are going to want to see how his continued rehab from such a devastating injury goes over the next several months.