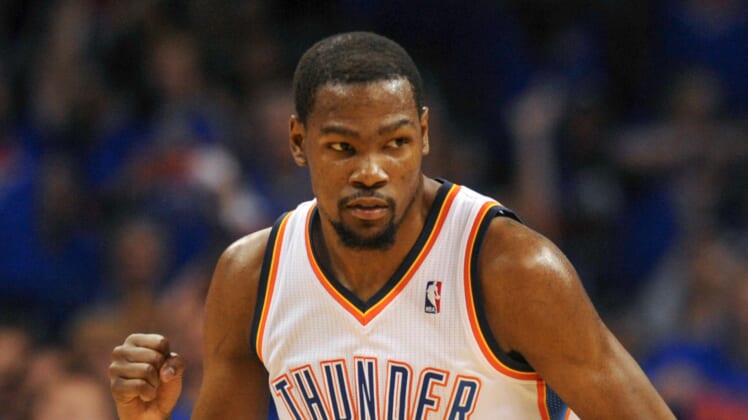 Kevin Durant is reportedly considering a move to the Big Apple.

Speaking on ESPN’s “First Take,” Stephen A. Smith reported on Friday morning that Carmelo Anthony is making a strong pitch to Durant to join the Knicks, and that Durant is considering the move.

“I know for a fact that Carmelo Anthony has been and will continue to recruit Kevin Durant until the cows come home. I’m also hearing that Kevin Durant is giving the New York Knicks consideration.”

Anyone doubting Smith’s validity as a source need look no further than his report earlier this summer saying the NFL was going after Tom Brady hard for destroying his cell phone. He was proven correct on that count, and this report regarding Durant must be taken seriously.

It’s also worth noting Durant was recruiting Anthony hard last year when he was a free agent, so the two have a history of trying to work together.

Another consideration in this equation is that Durant likely wants to become more of a national figure. He hasn’t entered elite status as it relates to endorsements, and a move to New York would certainly facilitate his growth in this area.

The all-world forward is in the final year of a five-year contract. He is set to earn $20.16 million this year and will be the most coveted free agent in the NBA following the 2015-16 season. He’s already won a league MVP trophy, and at the age of 26 is entering the prime of his career.