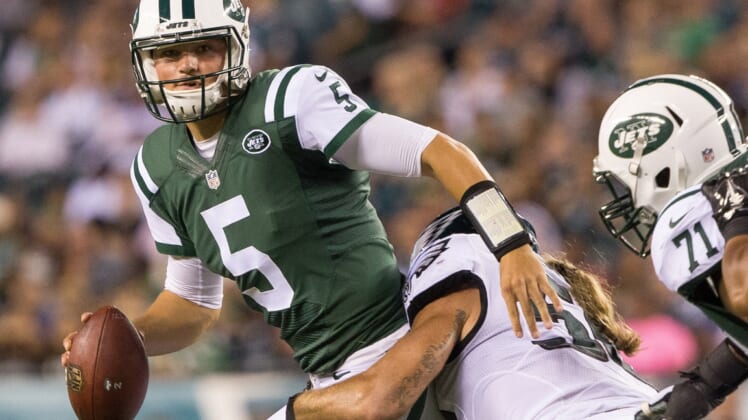 The New York Jets shocked the football world last April when they traded up to land Christian Hackenberg in the second round of the 2016 NFL Draft. A player many viewed as a late-round pick, Hackenberg did absolutely nothing to wow during the pre-draft process and was a player at the collegiate level who always struggled with accuracy.

Having that background, Hackenberg was seen by most as a project quarterback who was nowhere near ready to compete for a starting job. Being drafted early in a trade-up scenario was the worst thing that could happen to him, and compounding this was that he was thrust into the Big Apple to seemingly save the Jets — a team always searching for a franchise passer.

Seeing the writing on the wall, we wrote that Hackenberg was doomed to fail before the season ever began.

Then came the reports out of training camp that the young quarterback was just awful in practices — “brutally bad” was the term that was used. Even during the season it was apparent he couldn’t hit the broad side of a barn with a handful of rice.

Hackenberg barely participated in training camp and was minimally used during the preseason. He didn’t play a single snap in 2016, despite the fact that New York was tanking down the home stretch. Many wondered why this was the case, because some in-game experience is invaluable to any young quarterback with promise.

Now we’re hearing word that the Jets have an “overriding belief” that Hackenberg is still nowhere close to being a starting quarterback.

“One thing is clear: The Jets don’t believe that Bryce Petty and Christian Hackenberg will be the Week 1 starter. The feeling in the organization all last year was that Petty’s ceiling was NFL backup. The overriding belief on One Jets Drive is that Hackenberg isn’t even close to competing for the starting job in 2017,” wrote Manish Mehta of the New York Daily News.

Mehta also noted the Jets are keeping an eye on Mike Glennon’s situation in free agency and could also have some interest in Tyrod Taylor, if the Buffalo Bills release him.

That Hackenberg is seen as not close to competing for a starting job is hardly surprising. But it does highlight the Jets’ consistent inability to conjure up a starting-caliber quarterback that will be able to lead the franchise in the long term. They should have never traded up to draft Hackenberg in the first place — he would have likely still been available to them even if they had waited a couple rounds. And they sure as heck should have never thought he was ready to start any time soon to begin with.

Now the Jets are stuck in a hole and have no clear way out of it.