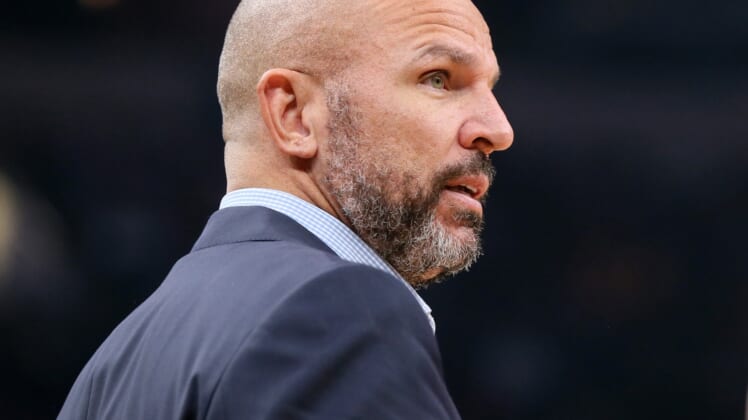 Los Angeles Lakers assistant Jason Kidd is looking for another opportunity to become a head coach and his shot might come in a familiar spot, with the Brooklyn Nets.

As Brooklyn’s regular season comes to a close in the NBA bubble, the front office is already working to find a coach who can work with its stars and build this team into a contender. While the search is just beginning, Kidd could reportedly have a shot at rejoining the Nets.

The Nets fired Kenny Atkinson in March, moving on from him just days before the NBA suspended operations due to the COVID-19 pandemic. As the organization looks for the right voice to build this team into a championship contender, several intriguing candidates have emerged.

According to The Athletic’s Shams Charania, Kidd is among several external names already drawing consideration to become Brooklyn’s next head coach. Along with the Hall of Famer, the Nets are looking into former NBA coach Jeff Van Gundy, Los Angeles Clippers assistant Ty Lue and Philadelphia 76ers assistant Ime Eduoka.

The Nets are looking for a coach who can help unite the locker room and can help elevate this team to reach its full potential. While Brooklyn fell short of expectations this season, it still made the postseason despite stars Kevin Durant missing the entire season and Kyrie Irving playing in only 20 games.

Notably, former Golden State Warriors coach Mark Jackson isn’t among the candidates listed under consideration. The 55-year-old enjoyed great success in Golden State before being fired after a 51-win season in 2013-’14 and is reportedly Durant’s preferred option.

Brooklyn gave Kidd his first coaching job in 2013 and the team went 44-38 in his first season at the helm. However, the Nets traded him to Milwaukee a year later.

Kidd recorded a 183-190 record across five seasons as a head coach, lasting four seasons in Milwaukee. After missing out on the New York Knicks gig this offseason, a return to Brooklyn would be a fitting storyline following a wild NBA season.