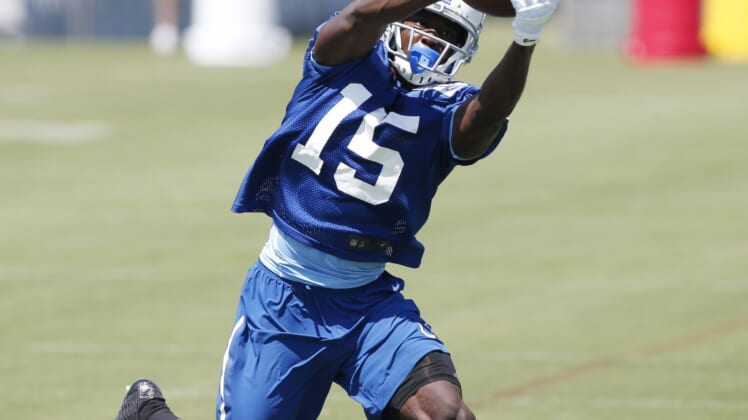 Phillip Dorsett has done nothing but impress the heck out of his Indianapolis Colts coaches since stepping foot in team facilities as a first-round pick this spring. As the first preseason game draws near, the speedy wideout continues to blow people away and has the Colts believing they found another superstar.

Ian Rapoport of NFL Network visited Anderson University and came away with glowing reviews for the rookie, as relayed by NFL.com’s Chris Wesseling. Rapoport said the Colts think they now have a “carbon copy” of Washington playmaker DeSean Jackson.

“They could not be higher on Phillip Dorsett,” added Rapoport on the Around the NFL Podcast. “I think they think they added a superstar.”

There is no doubt Dorsett has the kind of speed it takes to compare to Jackson. He left a trail of smoke on the track in Lucas Oil Stadium after running his 40-yard dash this past April at the combine, posting an “official” time of 4.33 seconds.

Andrew Luck now has Dorsett and T.Y. Hilton to throw bombs to all season long. And don’t forget about Andre Johnson and trimmed-down tight end Dwayne Allen. Essentially what you see here is an all-star cast at the receiver positions.

That should scare the heck out of opposing defensive coordinators. Just take a look at these numbers Luck put up this past February when he played in the Pro Bowl: 9-of-10 for 119 yards and two touchdowns for a passer rating of 155.8.

Dorsett is going to supercharge Indy’s offense to insane levels of output. Don’t be surprised if Luck seriously challenges Peyton Manning’s single-season passing record of 5,477 yards this season. Even if he doesn’t hit that mark, it will be fun to watch this offense rack up the yardage all winter long.