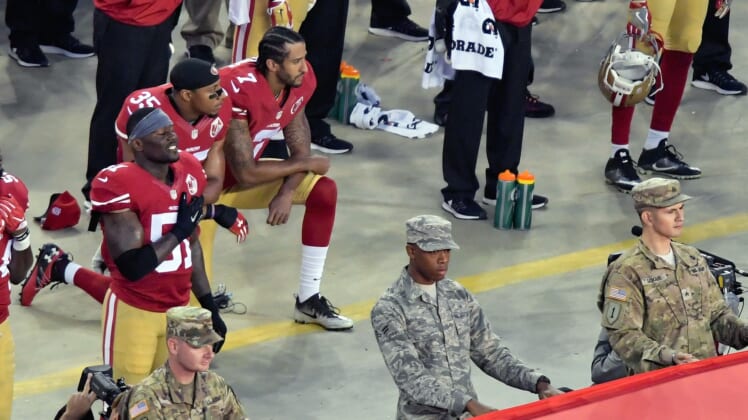 Colin Kaepernick has been effectively blackballed from the NFL since March of 2017. Could that soon change? Could an NFL team sign him in 2020?

Reporting Saturday, Mark Maske of the Washington Post shared that the NFL is not likely to hold a workout for Kaepernick like it did last season. That, many felt, was a public relations stunt.

However, the climate around the league has shifted in recent weeks. Now, per Maske, “there are increased hopes by some in and around the NFL that circumstances are more favorable for a team to sign Kaepernick.”

Kaepernick, of course, was essentially banned from the NFL following the 2016 season due to his peaceful protest against police brutality. It started with the then San Francisco 49ers quarterback sitting on the bench during the playing of the national anthem. After discussing his stance with former Green Beret Nate Boyer, Kaepernick started taking a knee during the anthem instead.

Other players took up that mantle as well, and a few have continued to do it during the anthem since then. However, the NFL as a whole largely showed disdain for the practice. Dallas Cowboys owner Jerry Jones, in fact, threatened to cut any player who followed suite.

The past couple of weeks as protests have sprung up across the nation, many have pointed to Kaepernick. Many other players have become much more outspoken about demanding change and calling out systemic racism and police brutality against African-Americans.

Then on Thursday, a powerful video featuring a bunch of stars speaking up about these topics was first shared by New York Giants superstar Saquon Barkley.

Later, we found out the video was put together by an NFL employee who went rogue knowing he could potentially lose his job.

“I decided, ‘Hey, I’m just going to go rogue here. If I can get one player to buy in, we’ll take a chance at this and see what can happen,’” video producer Bryndon Minter told Jordan Rodrigue and Lindsay Jones of TheAthletic.com. “I was at peace the whole time,” Minter told TheAthletic.com regarding the possibility of getting fired for it. “I think if I wasn’t at peace to lose my job, I wouldn’t have wanted to go out on a limb like that. . . . I was at peace, I still am at peace.”

The NFL has since publicly backed Minter.

After the video circulated around social media, NFL Commissioner Roger Goodell issued a video message admitting the NFL got it wrong previously. He also made it clear the league now supports Black Lives Matter.

Colin Kaepernick certainly has the stats and talent to play

Talent was never the reason Kaepernick was shunned by NFL teams. He led the San Francisco 49ers to Super Bowl XLVII following the 2012 season and nearly won it.

During his six-year NFL career (so far) Kaepernick proved himself to be one of the most dangerous playmakers in the league (watch here).

He also piled up the stats: Kaepernick passed for 12,271 yards with 72 touchdowns and just 30 interceptions in 69 games. A potent runner, he also racked up 2,300 yards and 13 touchdowns on the ground.

If the NFL really is serious about supporting Black Lives Matter, Kaepernick needs to be employed. It’s really that simple.