Report: Hue Jackson to the Vikings becoming a real possibility 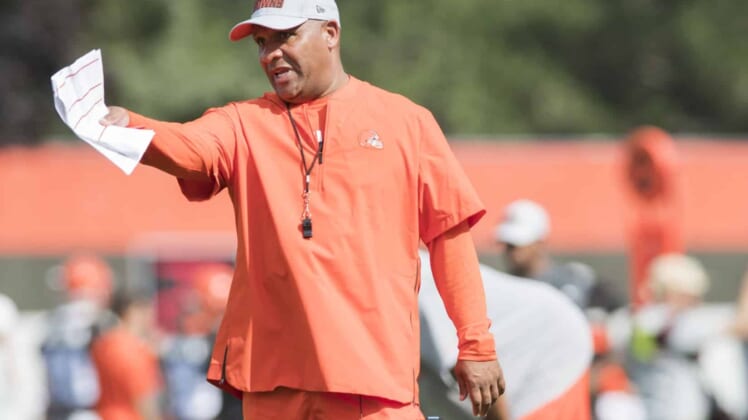 Cincinnati Bengals assistant Hue Jackson interviewed for the team’s head coaching vacancy earlier this week. Jackson, 53, was brought on to Marvin Lewis’ staff after being fired midway through the 2018 season by the Cleveland Browns.

We know the backstory here. Jackson posted a 3-36-1 record in 40 games as the Browns’ head coach before being canned. Cleveland went on to go 5-3 following his firing.

The idea that Jackson is even being considered for a head coaching role is absurd to a ton of people around the football world. Though, if he doesn’t land the Bengals’ gig, there’s a nice backup option for Jackson.

It was reported earlier in the week that Jackson was a candidate to replace recently-fired Vikings offensive coordinator John DeFilippo.

According to this note from Ben Goessling of The Star Tribune, Jackson taking over as the Vikings’ offensive coordinator is ‘becoming more of a real possibility.”

Hearing this morning that Hue Jackson to the Vikings is becoming more of a real possibility; sources said Mike Zimmer could try to hire him if Jackson doesn’t get the Bengals job. The key will be what Rick Spielman thinks of Jackson as a candidate.

Assuming Jackson doesn’t land the Bengals job after being endorsed by the above-mentioned Lewis, Minnesota could make sense for the coach.

Despite struggles as a head coach, Jackson is still seen as a great offensive mind around the NFL. He’s previously been an offensive coordinator with the Redskins, Falcons, Raiders and Bengals. Unfortunately, Jackson’s offenses have finished in the top 10 two times in nine years.