Report: ‘Growing uncertainty’ over John Fox’s future with the Bears 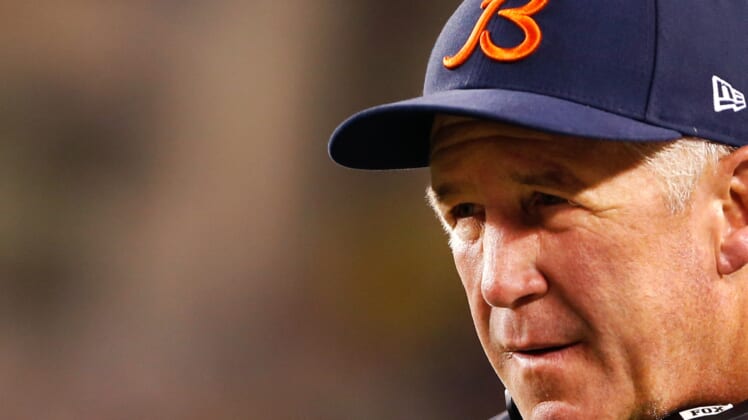 Following an embarrassing 36-10 loss to the Tampa Bay Buccaneers on Sunday, the Chicago Bears find themselves at 2-7 and with the second-worst record in the NFC.

Sunday’s disastrous performance can be summed up in looking at two Jay Cutler first-half passes, both ending in interceptions and coming on consecutive attempts. The last one resulting in a pick-six for former Bears safety Chris Conte (watch here).

Now comes this report from Bleacher Report’s Jason Cole suggesting that head coach John Fox may not be around for much longer in the Windy City. He also touches on Cutler’s imminent exit from the Bears.

“Jay Cutler accounted for three of Chicago’s four turnovers on Sunday, furthering the belief that he will be let go at the end of the season, according to a NFL source aware of the Bears’ thinking,” Cole reported. “There’s also growing uncertainty over the future of coach John Fox, who has been criticized for his lackadaisical management style.”

Fox took over the Bears’ sinking ship in 2015, leading the team to a 6-10 record. Though, it was just a one win improvement from the previous season. Now at 2-7, the Bears would be lucky to hit that six-win mark in 2016.

For his part, Cole did mention that some of the concern has to do with Cutler’s regression from what was a decent 2015 performance. As a defensive-minded coach, it remains to be seen whether Fox would receive the blame for that.

What we do know is that the status quo isn’t exactly working in Chicago. If that means Fox will be shown the door after two seasons, there’s unlikely to be any fans in Chicago shedding a tear here. The same can be said for Cutler.