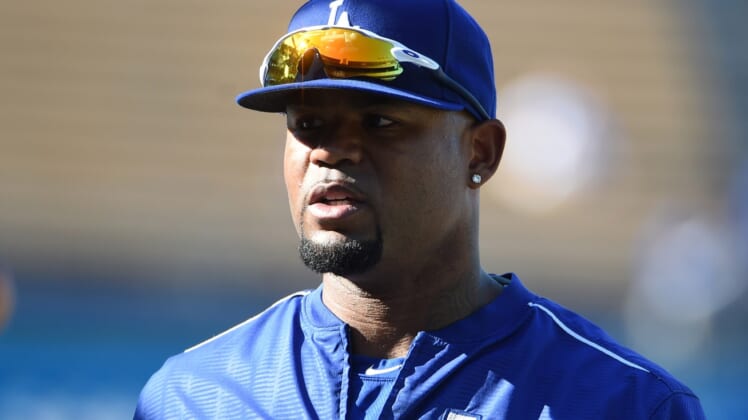 Carl Crawford, the former four-time All-Star outfielder, is in police custody in Texas following his arrest for felony domestic violence, per TMZ Sports.

The 38-year-old, who last played for the Los Angeles Dodgers in 2016, reportedly surrendered to Harris County authorities on Thursday and is facing felony charges for domestic violence.

According to court documents, via TMZ, Crawford is accused of choking his ex-girlfriend at gunpoint in May.

The woman told police that she recently ended her relationship with Crawford after more than two years together. Crawford allegedly arrived with a semi-automatic handgun after agreeing to meet him at her apartment on May 8.

According to the report, the woman said Crawford, “unloaded the clip and ejected a round of the pistol and began walking towards her holding the firearm.”

Crawford was said to be visibly upset and allegedly began interrogating the woman, telling her that he would hurt her if she lied to him.

According to the woman’s testimony, the former Tampa Bay Rays star pushed her to the ground in the hallway to prevent her from leaving the apartment. At that point, according to court records, he held her at gunpoint with one hand and used the other to grab her by the head and neck.

Crawford allegedly began squeezing the woman’s neck while interrogating her, trying to find out about an alleged relationship with another man. He then accused her of lying and slammer her head against the wall multiple times.

Police were reportedly called to the scene after Crawford left and observed pink areas on her neck and an injury to her right hand. Following the incident, Crawford allegedly texted her that he paid someone to track down the other male.

Crawford is currently being held on $10,000 bond as of Thursday night. Just a few weeks ago, a 5-year-old and a 25-year-old woman drowned in Crawford’s home in Houston.