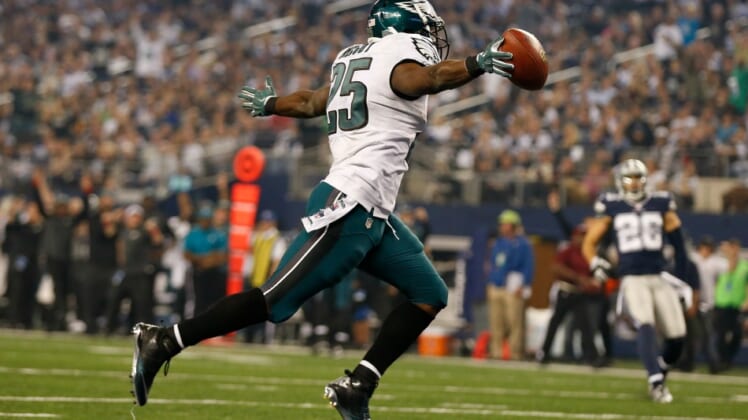 A week before free agency is set to open, the Philadelphia Eagles keep shedding cap space. Outside linebacker Trent Cole was released on Tuesday, and then running back LeSean McCoy was shipped off to the Buffalo Bills for inside linebacker Kiko Alonso.

Filed to ESPN: Bills have notified LB Kiko Alonso he is going to be traded to Philadelphia for RB LeSean McCoy. Trade official next week.

McCoy replaces C.J. Spiller, who apparently will not return given the fact he’s a free agent. McCoy is similar to Spiller but has had better luck staying healthy. He adds more than just talent to the backfield of the Bills, as he carries a hefty $11.9 million cap hit with him.

The two sides may work out a new deal or restructure, but as of now McCoy would be the second-highest-paid player on the team behind only defensive end Mario Williams.

Alonso is yet another in the long line of former Oregon Ducks to join head coach Chip Kelly in Philadelphia and would assume the starting inside linebacker spot—as soon as he’s healthy, that is. Coming off a season he missed thanks to a torn ACL, Alonso could still be on the mend by the time camp begins in July, though he told John Murphy of the Bills’ official website he expects to be 100 percent by training camp:

I anticipate being 100 percent before camp. By camp, I definitely feel I’ll be at 100 percent. I feel very good with where I’m at. By camp I’ll be full go.

Alonso is a tackling machine who racked up 159 total tackles as a rookie in 2013.