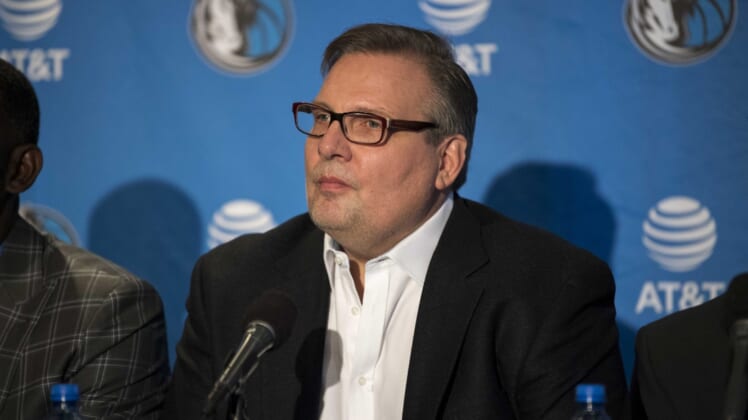 In the suit, Nelson claims that Dallas owner Mark Cuban terminated him last summer because Nelson reported that Jason Lutin sexually assaulted Nelson’s nephew in 2020. Lutin was referred to by Nelson in the lawsuit as Cuban’s “right-hand man.”

Further, Nelson claims that Cuban offered him $52 million to withdraw the wrongful termination claim and sign a non-disclosure statement over the alleged abuse of Nelson’s nephew, who was not identified in the suit, per ESPN.

“Everything in that filing is a lie,” Cuban wrote in an email response to ESPN. “We did multiple complete investigations and the only person that did not live up to the standards of the Dallas Mavericks was Mr. Nelson. He was fired as a result. He was well aware of the investigation. He refused to fully participate. I will say it again, everything he said is a lie.”

Nelson said in his lawsuit that assault and harassment of his nephew happened Feb. 16, 2020, during All-Star weekend in Chicago. However, Nelson claims he didn’t find out about the alleged abuse until five months later, at which point he confronted Cuban about it, per the report. Cuban and Nelson were negotiating a contract extension for Nelson at the time.

“It’s a complete lie and I defer to Mavs to comment and who have already dealt with this matter,” Lutin told ESPN in an email. “And obviously have a lot of information to show none of that ever happened.”

Nelson claims he was in talks with Cuban about a 10-year, $66 million extension in September 2020. But after delays caused by Nelson’s allegation, Nelson was fired June 13, 2021, according to the suit.

Nelson filed a claim with the Equal Employment Opportunity Commission this past December, per the report.

Nelson worked with the Mavericks for 24 seasons. The team announced in June that the sides “mutually agreed to part ways.”