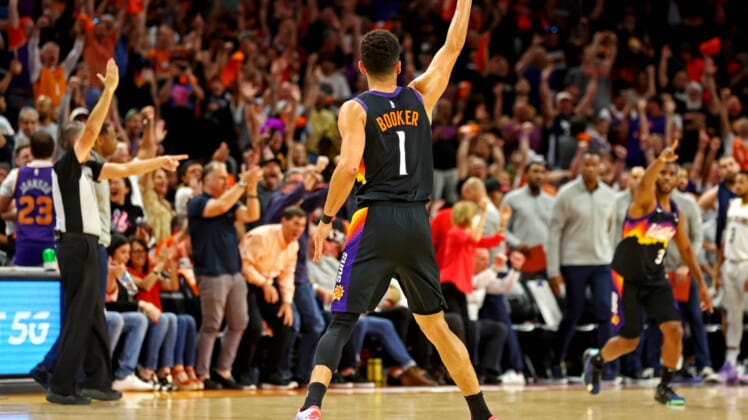 Phoenix star Devin Booker might be out for a week due to a hamstring injury suffered in the Game 2 loss as the Suns hit the road with the first-round series tied 1-1 with the Pelicans.

Game 3 is Friday at New Orleans, where the Pelicans also host Game 4 on Sunday.

“We’ve played without Chris Paul and Book before,” Suns coach Monty Williams said Tuesday night. “If we have to play without Book, next man up. We’ve done that all year long.”

Hamstring injuries are not a new problem for Booker, who played with a similar injury in the 2021 NBA Finals but didn’t report it. He missed seven games with a left hamstring injury earlier this season.

Booker exited with 4:35 left in the third quarter and headed back to the locker room to be examined. An MRI exam reviewed on Wednesday made it “unlikely” the three-time All-Star would be ready to play in the next two games, ESPN reported.

Before his injury Tuesday night, Booker scored 31 points — all in the first half — with seven 3-pointers and the Suns appeared poised to go up 2-0 in the series.

Game 5 would be played back in Phoenix on Tuesday.