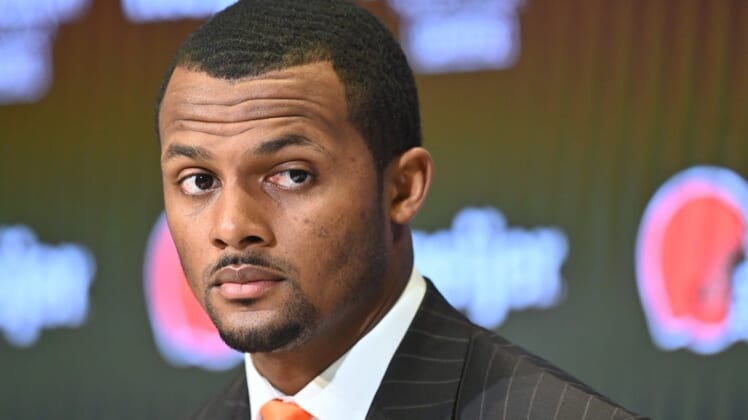 In addition to the 24 women who have filed lawsuits against Watson, the number also includes several who sued Watson before withdrawing their complaint; filed criminal complaints but didn’t sue; or neither sued nor pursued criminal charges.

The total also includes at least 15 of the therapists who issued statements of support for Watson at the request of his lawyer, Rusty Hardin, last year.

One woman told the Times that Watson “begged” her to perform oral sex on him.

“I specifically had to say, ‘No, I can’t do that,'” the woman said. “And that’s when I went into asking him, ‘What is it like being famous? Like, what’s going on? You’re about to mess up everything.'”

The Times report also revealed that the Houston Texans’ director of security, Brent Naccara, placed a non-disclosure agreement in Watson’s locker that Watson started bringing with him to massages. It occurred in November 2020, when one of the women presently suing Watson posted Watson’s phone number, some of his texts and Cash App receipts on social media and threatened to “expose” him.

Watson said during a deposition that Naccara provided the NDA. Watson played for the Texans until he was traded to the Browns in March. The Texans did not respond to the Times’ specific questions about Naccara and the NDA.

Two grand juries in Texas declined to indict Watson on criminal charges earlier this year, but in civil court he faces 24 lawsuits, two of which were filed in the past week.

The 24th woman filed suit Monday, saying Watson exposed himself during a massage, asked her an inappropriate question and ejaculated onto her chest and face.

The NFL continues to investigate Watson and recently wrapped up interviews with the quarterback. Despite no criminal charges being filed, the league could suspend Watson for violating the league’s personal conduct standards.

The Browns acquired Watson from the Houston Texans in a trade in March and gave him $230 million in guaranteed money on a five-year deal.