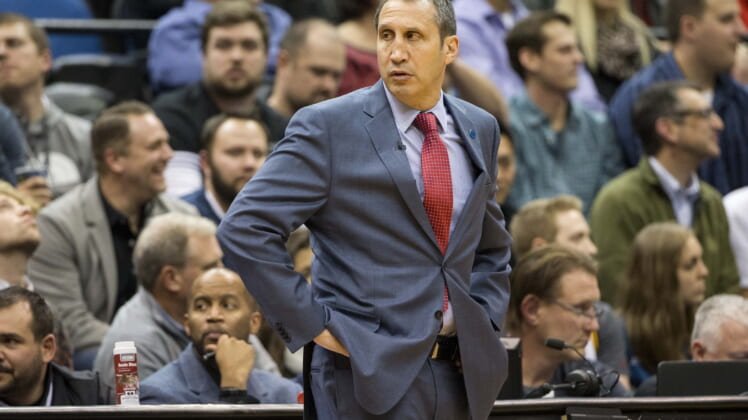 The Houston Rockets have left no stone unturned in search for a viable full-time head coach to replace the recently departed J.B. Bickerstaff, who took over the role on an interim basis after Kevin McHale was fired early in the 2015-16 campaign.

Everyone from journeyman Mike D’Antoni to former Rockets legend Sam Cassell has been considered candidates for the opening.

Now comes this report from ESPN’s Marc Stein indicating that the Rockets are interviewing former Cleveland Cavaliers head coach David Blatt for the opening on Monday:

Blatt, 53, posted a 30-11 record for Cleveland prior to being fired halfway through the 2015-16 season. That came on the heels of him leading the Cavaliers to the NBA Finals in his first season as a head coach in the Association.

Widely respected around the basketball world, most of Blatt’s experience comes in Europe where he earned the Euroleague championship as the head coach of Maccabi Tel Aviv back in 2014.

He also has experience coaching the Russian and Israeli national teams on an international stage.

It would be a relatively interesting hire for a Rockets organization that continues to cast a wide net in its coaching search.

Blatt is also said to be under consideration for the New York Knicks head coaching vacancy.

Should the veteran coach fail to latch on as a head man around the Association, he will definitely be in consideration for Steve Kerr’s top assistant post with the Golden State Warriors.

After all, he nearly joined Kerr in Oakland prior to taking the Cavaliers job a couple years back.

It will be interesting to see how this whole thing plays out for both the Rockets and Blatt.