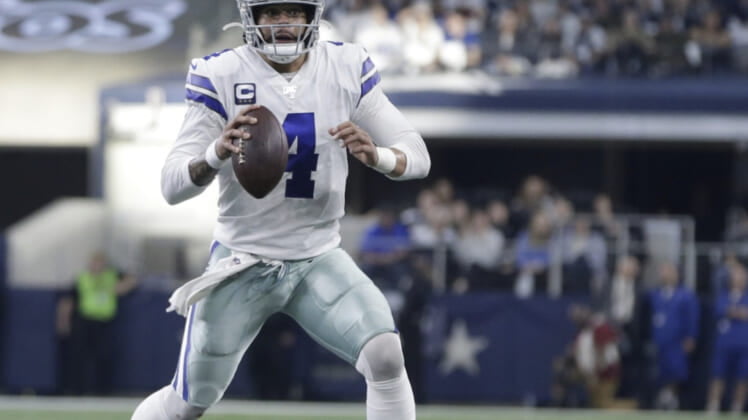 There’s been a lot of rumors floating around surround the future of impending free-agent quarterback Dak Prescott with the Dallas Cowboys.

The latest rumor suggests that Dallas will franchise tag Prescott with the hopes of trading him. Why? Well, the two sides continue to be far apart in extension negotiations heading into the start of free agency next month. For his part, Prescott is said to be demanding $40 million annually.

According to NFL insider Jay Glazer of The Athletic, that’s actually not the case. He references reigning Super Bowl MVP Patrick Mahomes in making the case.

“Dak will be the quarterback of the Cowboys. Period. End of story. I don’t see him getting 40,” Glazer reported. “I see Patrick Mahomes as the first $40 million-a-year guy. Whatever he does, any other team can look and say, “Well, you didn’t win an MVP and a Super Bowl MVP so you’re not going to make as much as that.” But whether they franchise Dak, give him an extension, or whatever it is, it’s going to get done. He will be the quarterback of the future for the Cowboys, and no, he’s not asking for 40.”

That makes a whole lot of sense. Mahomes is going to reset the quarterback market this offseason with a deal we’ve never seen before. That should start at $40 million annually.

No other quarterback is going to come close to reaching that mark. Houston Texans signal caller Deshaun Watson, also eligible for an extension for the first time this offseason, will likely come the closest.

Dallas reportedly offered Prescott $34 million in recent negotiations. That seems to be a fair offer. Whether the Pro Bowl quarterback and his agent Todd France at CAA Sports agree remains to be seen.

If the Cowboys are not able to come to a long-term deal with Prescott ahead of next month, they’ll place the franchise tag on him. That values is said to be around $27 million.