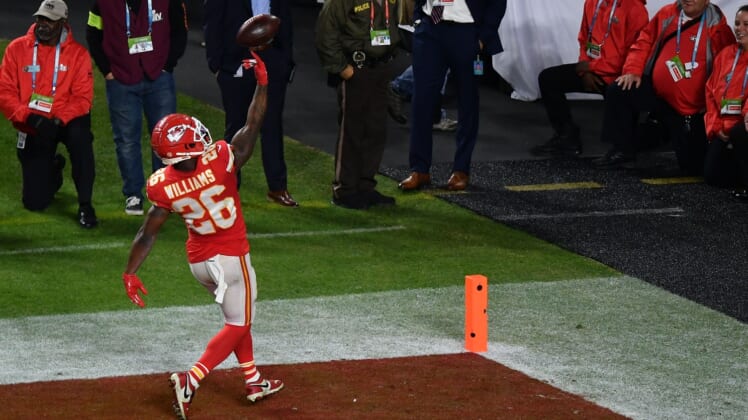 Kansas City Chiefs running back Damien Williams delivered the final blow to the San Francisco 49ers to clinch a win in Super Bowl LIV. Now, the Chiefs are making sure their Super Bowl hero returns next season.

According to NFL Network’s Ian Rapoport, the Chiefs will pick up the $2.3 million option on Williams’ contract for the 2020 season, keeping the explosive running back in their backfield.

Williams missed five games this season due to injury, but he averaged 4.5 yards per carry and racked up 711 total yards and seven total touchdowns in 11 games. After scoring three touchdowns in the AFC Divisional Playoff win over the Houston Texans, Williams exploded for 104 rushing yards, 28 receiving yards and three total touchdowns in Super Bowl LIV.

A former undrafted free agent out of the 2014 NFL Draft, Williams saw limited action until arriving with the Chiefs in 2018. In two seasons since arriving in Kansas City, Williams has racked up 1,127 total yards and 13 total touchdowns on 214 touches.

The 27-year-old will likely play a prominent role next season in Kansas City’s backfield, but the team could draft a running back in the 2020 NFL Draft. Given their decision to exercise Williams’ option, the Chiefs are even likelier to follow the latest mock draft and select a linebacker with their first-round pick.