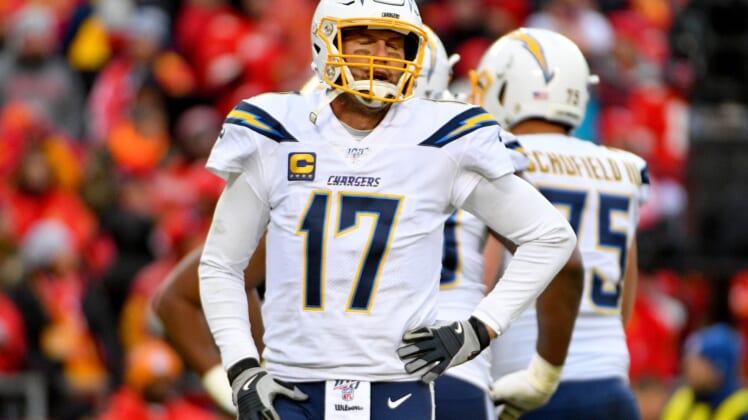 As the Los Angeles Chargers turn their focus to the offseason, the front office is reportedly already making long-term plans for a future without quarterback Philip Rivers.

According to Bleacher Report’s Matt Miller, several around the league believe the Chargers will draft a quarterback early in the 2020 NFL Draft. Specifically, the front office could consider drafting quarterback Justin Herbert or Tua Tagovailoa if they are available with the No. 6 pick.

Rivers is coming off a disappointing season in Los Angeles. While he threw 23 touchdowns with 4,615 yards across 16 starts, he also threw 20 interceptions and ranked 22nd in ESPN’s QBR (48.9).

The Chargers will certainly make an effort to retain the 38-year-old quarterback, especially since this is the only team Rivers has played for since being the No. 4 pick in 2004. However, Los Angeles likely realized this season that its window with Rivers is closing and now could be the perfect time to land its quarterback of the future.

Even if his days with the Chargers are over, Rivers made it clear he will not retire and is willing to play elsewhere. Perhaps the Indianapolis Colts, who are in the market for a quarterback, could emerge as one of his suitors this offseason.