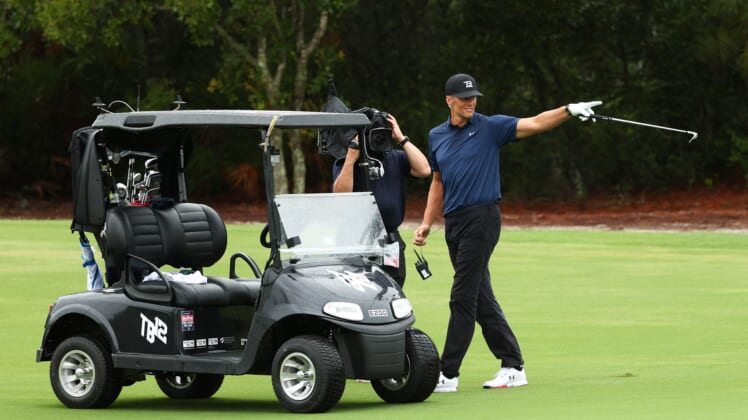 May 24, 2020; Hobe Sound, FL, USA; NFL player Tom Brady of the Tampa Bay Buccaneers reacts after holing out from the fairway on the seventh during The Match: Champions for Charity golf round at the Medalist Golf Club. Mandatory Credit: Handout Photo by Getty Images for The Match via USA TODAY Sports

The Tampa Bay Buccaneers have found their pied piper, according to Michael Giardi of NFL Network. Tom Brady has already won many of his teammates over already and is drawing rave views for the energy he’s bringing, along with his leadership.

Brady has put together some workouts with teammates already, and the reports coming out of those are overwhelmingly positive. However, that’s not the only way he’s impacting his new Buccaneers teammates.

“I was told he is lighting up the Zoom meetings,” Giardi reported. “Intelligent questions, personality, engaging his teammates — this is exactly what they need.”

Giardi also was told by another player that Brady is being “aggressive” and is “becoming our leader” already.

With two decades of NFL experience and six Super Bowl wins under his belt, Brady certainly has the clout to make this type of impact. We already know his new teammates are over the moon for this opportunity to play with the G.O.A.T.

Still, it’s not hard to see that Brady is as charged up about the upcoming season as he’s been for anything football related in some time. That energy has led to big-time increases in interest from fans buying tickets. And soon, it could lead to something even more meaningful for this franchise.