Report: Buccaneers have no plans to interview Brian Kelly 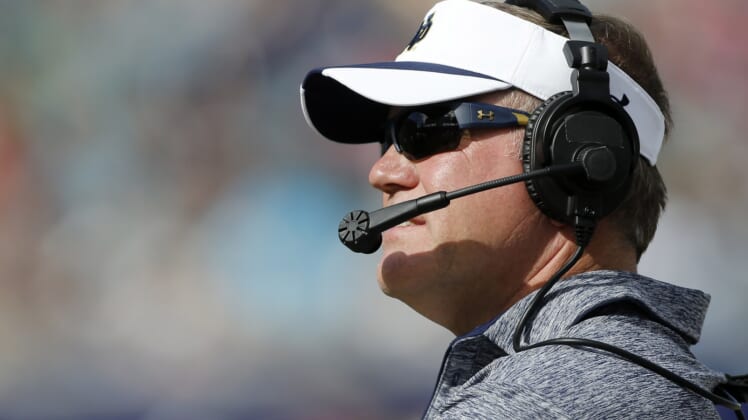 A report earlier on Wednesday indicated that the Tampa Bay Buccaneers were interested in hiring Notre Dame head coach Brian Kelly in the same role mere days after they fired Dirk Koetter.

On the surface, a Kelly-Buccaneers pairing would make some sense. Tampa Bay general manager Jason Licht confirmed earlier in the week that quarterback Jameis Winston will return for the 2019 season.

Given the success Kelly has had with his quarterbacks in South Bend, it would be an interesting match.

But according to ESPN’s Jenna Laine, there are currently no plans for the Buccaneers to interview Kelly.

There are no plans for the Bucs to interview Brian Kelly at this time. The only interviews I’ve personally confirmed are Eric Bieniemy (today) and George Edwards (Friday). https://t.co/dvOBR1qhmA

This could obviously change over the short term. The current coaching cycle around the NFL tends to bring up misinformation and the like. But as of now, it doesn’t look like Kelly is a legitimate candidate for the Buccaneers’ opening.

Kelly, 57, is viewed as a legitimate NFL head coaching candidate. He led the Irish to the College Football Playoff and a perfect regular season record in 2018 before bowing out to Clemson in the Cotton Bowl.

Notre Dame’s head coach since 2010, Kelly has led the program to a combined 60-34 record an four major bowl games during that span.