Report: 49ers will franchise Jimmy Garoppolo if no extension is reached 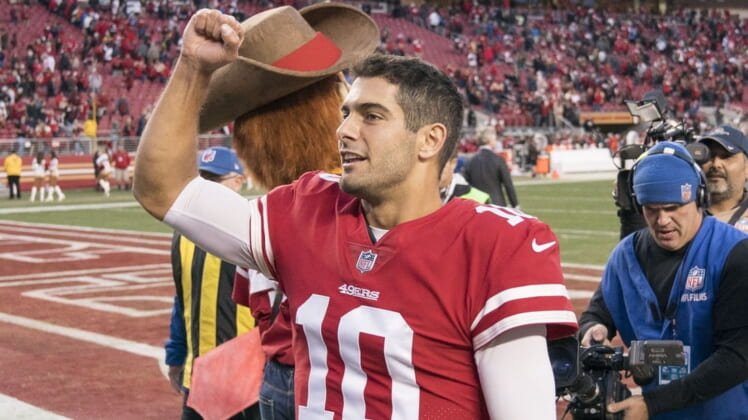 The San Francisco 49ers apparently have their franchise quarterback. It comes in the form of a player in Jimmy Garoppolo who has won each of his first four games as the team’s starter, the latest being a 44-33 win over the AFC South champion Jacksonville Jaguars.

And for any team hoping that Garoppolo might hit the free agent market this upcoming March, it doesn’t look like that will be the case.

According to Matt Maiocco of NBC Sports Bay Area, the 49ers will work towards a long-term extension with Garoppolo prior to free agency starting in March. Should that not happen, San Francisco will place the franchise tag on their newest crown prince, assuring that he’s back with the team in 2018.

In no way should this come as a surprise. Despite the brilliance Garoppolo has displayed in his quarter-season starting for the 49ers, they didn’t acquire him from New England to be a short-term starter for a team that’s still just 5-10 on the year.

When it comes to a potential long-term extension, it gets pretty tricky. Sure the 49ers wouldn’t have much of an issue paying Garoppolo north of $20 million annually to be their franchise quarterback. But if Garoppolo plays like he has the past four games throughout the 2018 season, the value of said contract would be enhanced a great deal.

In leading the 49ers to the greatest in-season turnaround in NFL history, Garoppolo has broke multiple franchise records in the process.

He’s the first 49ers quarterback to win each of his first four starts for the team. He’s put up the most passing yards during that span in franchise history, a total number that surpasses Joe Montana and Steve Young combined in their first four starts with the 49ers. He’s also the first quarterback in the NFL since Ben Roethlisberger back in 2004 to win his first six NFL starts.

The promises to be among the most interesting stories heading into the offseason around the NFL.