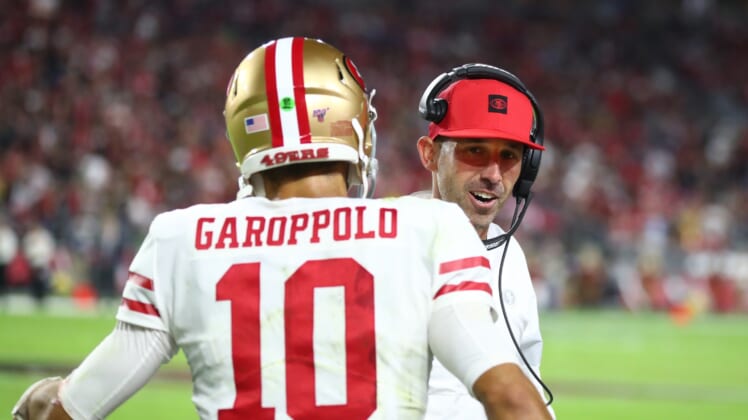 San Francisco 49ers quarterback Jimmy Garoppolo is coming off one of the best statistical seasons in franchise history. He helped lead San Francisco from a 4-12 record in 2018 to 13 wins, the NFC West title, the No. 1 overall seed and a shocking Super Bowl appearance.

Even then, rumors continue to persist that San Francisco could dump Garoppolo in favor of impending free-agent quarterback Tom Brady.

While those have since been debunked, another report suggests that 49ers head coach Kyle Shanahan has reserverations about Mr. Garoppolo.

This is the same Patriots beat writer who linked Brady to the 49ers earlier in the week. As it relates to that, Curran now indicates he was somewhat joking.

In terms of Garoppolo, he was absolutely brutal in San Francisco’s loss to the Kansas City Chiefs in Super Bowl LIV. The former Patriots second-round pick also didn’t do much in the two playoff games leading up to the Super Bowl. Though, he really didn’t need to.

Overall, the 28-year-old Garoppolo completed 69% of his passes for 3,978 yards with 27 touchdowns and 13 interceptions in his first full season as a starter.

If the 49ers do indeed have reservations about Garoppolo, being linked to Brady makes some sense. But it is still a highly unlikely scenario.

Of those potentially available on the free-agent and trade markets, Garoppolo stands above his counterparts. We can’t envision Shanahan and Co. moving on from the quarterback in favor of someone like Philip Rivers, Jameis Winston or Derek Carr. That’s for sure.